Dozens Arrested In Algeria Ahead Of Weekly Protests 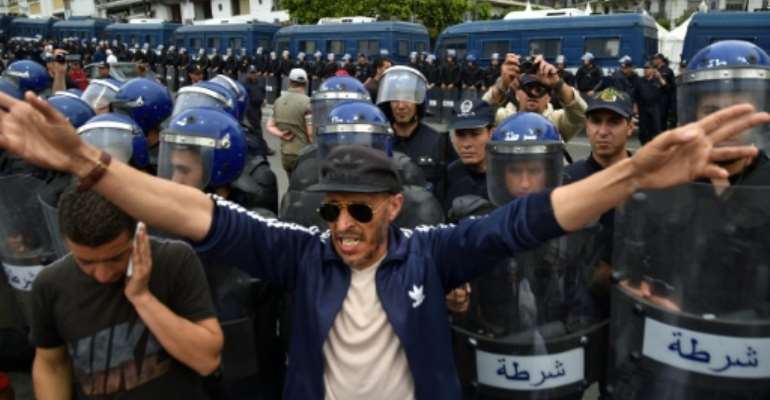 Algerian police arrested dozens of people on Friday at the Grand Post Office, a key rallying point for protesters in the capital Algiers, witnesses and journalists said.

An AFP journalist saw a woman arrested near the post office, where security fences were erected this week in an attempt to prevent demonstrators accessing the site.

Several hundred protesters gathered near the building on Friday, but they were kept at bay by a police cordon and a row of vehicles.

"Patrols criss-crossed the city and arrested anyone suspected of joining the rally," Said Salhi, vice-president of the Algerian League for the Defence of Human Rights, said on Twitter.

"It seems they (the authorities) want to ban the rally," he added.

The protest movement forced president Abdelaziz Bouteflika to step down on April 2, after two decades in power.

But rallies -- now into a fourteenth week -- have continued each Friday, to pressure army chief Ahmed Gaid Salah, interim President Abdelkader Bensalah and others to leave office.

Mehenna Abdeslam, a protester and a university teacher, told AFP he witnessed "the police systematically arrest anyone carrying a banner".

But "we will not stop" demonstrating, he added.

It also noted a heavy presence of female police officers, for the first time since the protests began.

A presidential election that was originally due to take place in April is scheduled for July 4, but the protest movement wants the poll scrapped, in the absence of new independent institutions to oversee voting.