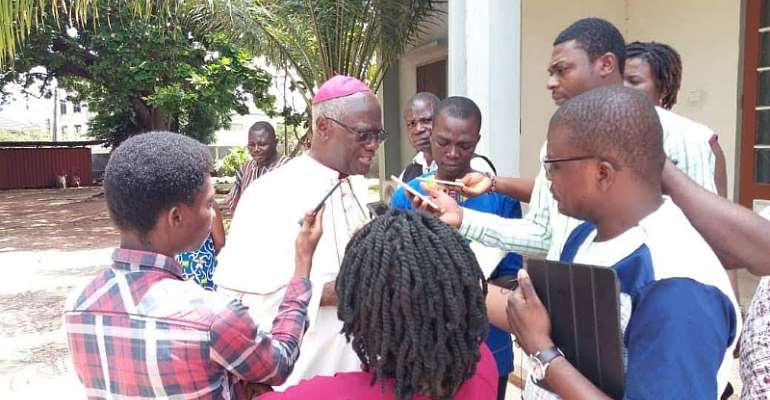 The Metropolitan Archbishop of Accra, Most Reverend John Bonaventure Kwofie, has called for increased security conscious in all Churches across the country to avert the growing threats of violence attack on Christianity.

He said it was time Christians take the warnings of growing violence being instigated by Islamic extremists, Jihadist, serious and beef up security in every Church.

Most Rev Kwofie made the call when members of Catholic Association of Media Practitioners, Ghana (CAMP-G) paid a courtesy call on him at his office in Accra Thursday, May 23, 2019.

A recent attack on churches at Burkina Faso left six persons dead and several others injured.

To this effect, Archbishop Kwofie said, the Catholic Church has taken the threats seriously and has already met the police over the threats.

In the mean times, the Archbishop said, the Church would strengthen its internal security and ensure that all persons entering church premises are screened.

" I think last week or so we the Catholic Bishops Conference of Ghana met the Inspector General of Police and we are taking measures."

"The police will give us the security measures but we are asking Ushers in churches to be alert," he stated.

In the view of Archbishop Kwofie, Ghanaian should be alert and not allow persons he described as " stupid" to come and destroy our country.

He, however, used the opportunity to urge the Catholic Media Practitioners to use their profession to promote the church and its doctrine.

He said communication is the soul of everything and if not properly communicated to the public, it could affect the church.

The Archbishop assured the media of his utmost support to champion the course of the Church in the Accra Archdiocese.

Ms. Victoria Lugie, President of CAMP-G, on behalf of members thanked the Archbishop and assured him of the association preparedness to support the Church.

She said, the association would continue to work and published stories and features that would promote the image of the Church.

Ms. Lugie added that the association would extend its formation across the country but appealed to the Archbishop to let his priests use the pulpit to propagate the formation of CAMP-G.