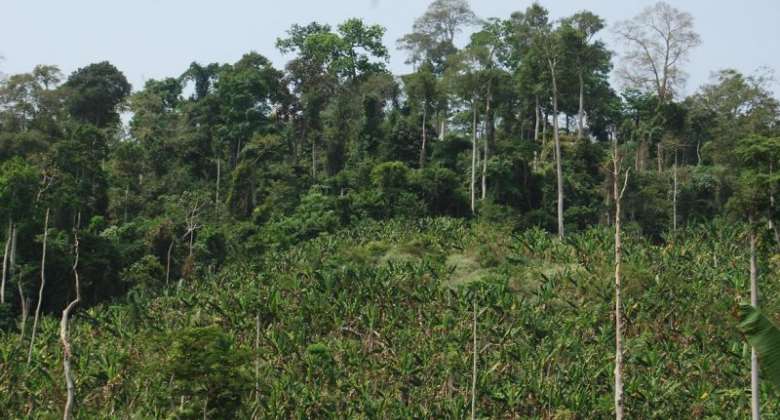 If the following story had been published anywhere else but in Ghana, the hullabaloo that would have arisen from it would cause Ministers to resign, and/or officials dismissed. Here is the story:

“MORE than 140 trees covering a large swath of land, have been cut down at the Department of Parks and Gardens (DPG) to pave [the] way for a private multi-purpose office complex in Cantonments, Accra, a visit by the Ghanaian Times to the DPG on Tuesday has revealed.

“At the time of the paper’s visit, the debris of the cut-down trees had been cleared, with construction material like sand, concrete blocks and gravels on [the] site for the commencement of work.

“ The Ghanaian Times gathered that about 5,000 flowers and other ornamental plants were destroyed, leaving that place bare and barricaded.

“It was also noticed that foundation works [for the building] had already begun. When authorities at the DPG were contacted, they said they did not have [the] authority to comment on the matter. [They said] they do not know who ordered the trees to be cut down but believed it was an order ‘from above’.

[They revealed that] the place had been sold out to a yet-to-be-known developer. The area which hosts the offices of the DPG is the largest garden in Accra, with many species of trees and flowers. The 10-acre land is home to not only beautiful trees, but also birds and small animals. Describing the situation as worrying, the campaign leader of ”Eco-concerned Citizens”, an eco-friendly pressure group, Awula Serwah, called for a national campaign against the “incessant felling of trees” in Ghana.

“Miss Serwah said the development was of great concern and that at a time when Ghana [was] losing its forest belt at a faster rate than any other country in the world, “environmental vandalism was taking place at Parks and Gardens.” She said of late, it was not uncommon to see concrete buildings replacing trees in the country… “Accra is becoming a concrete jungle”, [she added.] UNQUOTE

The crux of the matter is that this is yet another instance of Ghanaian officialdom selling lands (acquired by the state for an expressly-stated purpose) to members of their cliques who are involved in estate development.

First of all, these lands should on no account be sold because they were acquired through “Gazetted” procedures and should not be disposed of without a legislative fiat based on similar procedures.

QUESTION: Does the state ever OPENLY advertise the availability of lands and “bungalows” for sale? I, for one, have never seen any such an advertisement. Yet, many properties, which were once Government property, are now in private hands. State officials secretly designate certain properties as “available”; secretly tell their wealthy friends about them, and secretly conspire on the prices to be paid and on how to secretly evade counter-action by the lawyers employed by the state to look after its interests (some of whom are members of the secret cliques.)

Before anyone knows, the concrete structure would be standing up and shining, and the idea of summoning the moral courage to demolish it, or to otherwise re-acquire the land for the state, becomes academic. It’s called a fait accompli!

There are many areas in Accra – the Cantonments area; the Ridge area; the North Labone area and other areas formerly consisting of publicly-owned properties -- which are now in private hands. No Government of integrity would ever have sold such properties SECRETLY.

Indeed, a commission of enquiry should be established to find out how, when and what state-owned properties have got into private hands. How much was paid for them? What did the Government’s lawyers do to prevent their acquisitions?

Of course, the leaderships of our main political parties are extremely interested in owning property and so, we may never find out how so many instances of “state capture” have occurred. But those who follow world affairs will know that “state capture” has caused a social rebellion in South Africa, with the result that ex-President Jacob Zuma actually lost his job, and may eventually go to prison for what he did.

The way South Africa’s Government lawyers and intelligence agencies behaved when they were obliged to enquire into “state capture”, has become a classic example of how officials combine to mulct state resources [almost] “legally” when a powerful individual is involved.

We do have an example right here in Ghana too -- Achimota School lands have been encroached upon with impunity, and no-one seems able to do much about it, because, of course, the Government that acquired the lands doesn’t care a hoot about what happens to it.

Now let’s get back to Parks and Gardens: the destruction of so many plants at the very heart of the institution set up specifically to ensure plant preservation and the encouragement of private, small-scale horticulture, amongst the urban populace, is one of the most mind-blowing examples of state-assisted vandalism ever to be carried out anywhere in the world.

President Kwame Nkrumah established the MINISTRY (no less) of Parks and Gardens in the early 1960s and put a full Cabinet Minister, Mr E. N. Ocansey, in charge of it. People thought the job was a sinecure, but Mr Ocansey, a very good businessman, seized the opportunity to get the aspiring “bourgeois” house-owners of Ghana to buy into in what he was doing, by selling those plants and expertise at a cheap price. Even the so-called “socialist boys” of Nkrumah -- like Tawia Adamafio and John Tettegah -- planted “carpet grass” in their houses – courtesy of Parks and Gardens. And the Housing Corporation, for its part, ensured that most of the hedges around its houses, consisted of climbing plants and other vegetation.

Ao – how I wish some of our current administrators had the mettle to teach the philistine vandals where to get off.

Alas, I believe the Ministry of Local Government is now responsible for the Department of Parks and Gardens. Yet, this Ministry and its “municipal” and “district” authorities have proved by their tree-felling spree that they have no regard whatsoever for preserving the beauty of our environment. Haven’t members of the Government noticed the wanton manner in which they have cut down so many trees in Accra?

The trouble is that “institutional memory” hardly exists in our Ministries. Important institutions are thrust into the hands of Ministries whose personnel may have no interest whatsoever in understanding, let alone preserving, the functions of the institutions they inherit. So disaster is inevitable.

Well, state vandalism has gone on long enough. Let the unreconstructed philistines who have gained an entrée into our administration, go and carry out their vandalistic actions somewhere else. Our Government should restock Parks and Gardens in Accra, and should, in the meantime, also revive other places of beauty, such as the Aburi Gardens and the Bunso Arboreum. Man must not live by concrete alone, for God’s sake!