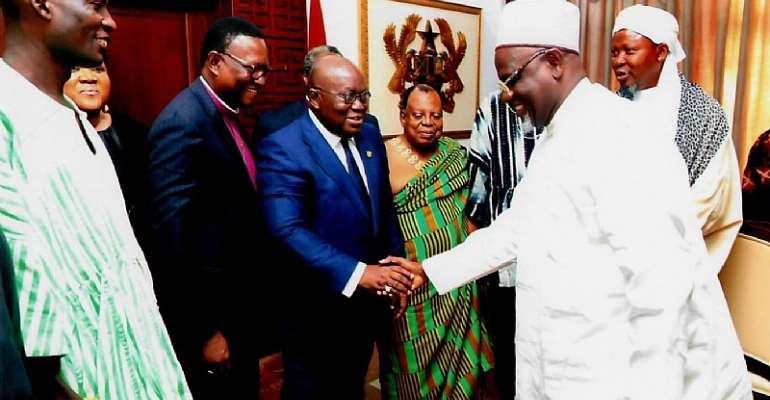 Civil society group, Patriotic Front Movement of Ghana (PAFMOG) has called on the National Peace Council to step up and resolve the numerous controversies which is gradually engulfing the country.

The group stated in a press release which was copied to Modernghana that, there is so much tension in the country ranging from the conflict between the Konkombas and Dagombas to the Vodafone Ghana Music Awards (VGMA) brawl.

PAFMOG appealed to the National Peace Council to hold their ground to quell and tranquillize all forms of disputes in our country before they intensify.

Below is their statement,

To All the Media House and the General Public

NATIONAL PEACE COUNCIL SHOULD BE UP AND DOING BEFORE GHANA ENDS IN DOOM.

Patriotic Front Movement of Ghana (PAFMOG), sincerely wishes to bring it to the notice of National Peace Council and the general public that, our hearts break when we see these numerous disputes across the country.

Lately, the rate at which conflicts are increasing in our country is becoming unbearable.

In a layman's perspective, one can conclude that most parts of our country are unsafe, and it is been surrounded by disputes.

Just to mention few, the ongoing GFA Normalization Special Competition has recorded a lot of unannounced incidents; particularly the match between Brekum Chelsea FC and Kumasi Asante Kotoko ended up bloody in the Sunyani Golden City Park and other unfortunate incidents in different venues.

The tensions between the leadership of New Patriotic Party (NPP) and National Democratic Congress (NDC) can never be ruled out in this press release, particularly, the case between the NDC national Chairman and the Ghana Police service concerning a leaked voice tape.

Not forgetting the continuous political vigilantism and other pending matters related to the Electoral Commission of Ghana (EC) which have become a pain in the neck.

Snags associated with tribalism and ethnicity are gradually escalating and distorting our countrys democracy; for instance, the conflict between the Konkombas and other ethnic groups such as the Dagombas, Nanumbas and Gonjas is nothing to write home about.

The smoldering feuds between artists in our Music industry is another menace to the peaceful development of our country. The mayhem caused from the camps of Shatta Wale and Stonebwoy in the just ended 20th edition of the VGMAs is just a minuscule of the ticking timebomb in the industry.

The rate at which most parts of our country are directly or indirectly impacted by conflicts or disputes in one way or the other infer that our politicians especially NPP and NDC has totally failed us as a country.

On this note, we the entire Leadership and members of PAFMOG, humbly appeal through this press release to our National Peace Council to truly hold their ground to quell and tranquilize all forms of disputes in our country before they intensify.

We strongly believe they are the unsurpassed institution that can calm all nerves and counteract the conflicts in our dear country.

In conclusion, we wish to convey through this press release that we all should in our own small ways be ambassadors for the changes we want to see in our dear country, Ghana. Once I change and you also change, Ghana will automatically change.

There is no Ghana without ME and YOU.

We can achieve this by fully putting on the SPIRIT OF PATRIOTISM to serve our dear country Ghana.

Contact the following for More details or visit the link below