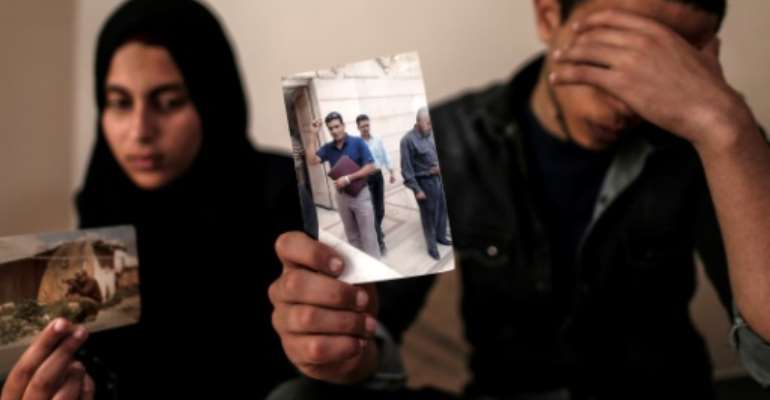 The daughter and son (pictured April 2019) of Zaki Mubarak, whose body was transferred to Cairo after Ankara said he had committed suicide in prison, hold his picture during an interview in their family home. By MAHMUD HAMS (AFP/File)

The family of a Palestinian former intelligence agent, who have claimed that he was tortured by Turkish authorities, said Tuesday that Egyptian prosecutors had approved their request for an autopsy.

The body of 55-year-old Zaki Mubarak was transferred last week from Turkey to Cairo after Ankara said last month he had committed suicide in prison.

Turkey had charged him with spying for the United Arab Emirates.

After seeing his body on its arrival in Egypt, his family said it had been badly mutilated.

"His tongue was removed and we saw marks of torture on the corpse," said Abs Mubarak, his cousin, who is in Cairo.

He accused Turkish authorities of carrying out an "extra-judicial killing".

Mubarak, from the Gaza Strip, had fled the enclave in 2007 after Islamist movement Hamas seized control there.

He was arrested in Turkey last month, along with another alleged spy, and later formally charged with espionage, according to Turkish state news agency Anadolu.

Turkish media have speculated he was allied to Mohammed Dahlan, a UAE-based former supporter and now rival of Palestinian president Mahmud Abbas.

His family have denied he had any relationship with Dahlan's movement.

Ankara has been investigating claims the two detainees were linked to the killing of Jamal Khashoggi, a Saudi journalist whose killing in the country's Istanbul consulate last year sparked a diplomatic crisis.

His family deny the allegations.

Mubarak's cousin said the autopsy was due to be finalised by the end of Tuesday before the body would be returned to the blockaded Gaza Strip later this week.

Sensitize School Children On Wearing Face Masks Before And A...
53 minutes ago