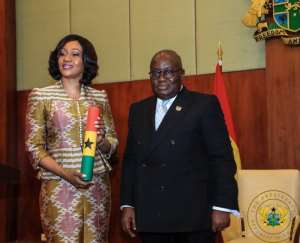 The new Commissioners of the Electoral Commission have been urged to demonstrate their neutrality towards the upcoming elections despite the controversies surrounding their appointment into office.

Former President Mahama says it will enable them win the confidence of the political parties which are a necessary part of the electoral process.

According to him, the posture of the new Electoral Commissioner, Jean Mensa so far is not a very healthy one which could be a hindrance to finding amicable solutions to challenges that may arise as the nation builds up to its next general elections in 2020.

He added that the political parties desperation for answers shoul not be viewed as nuisance as the Chairperson and her Commissioners would want Ghanaians to believe indicating that parties have an important part to play in the democratic process.

“When the EC starts behaving as if representatives of political parties are a nuisance and say we have a mandate to do this and so we will do it. Then what you do is, you affect the trust and confidence of the people that the EC is a neutral arbiter that can handle these elections properly,” he noted.

The New Electoral Commission Boss, Jean Mensa and his assistant, Dr. Bossman Asare, have had hard time getting along with the political parties on a number of issues at the IPAC meetings.

They were appointed after the former EC Boss appointed under the John Dramani Mahama administration was removed in a controversial manner by the Akufo-Addo led administration.

This controversial circumstances have added to the already fragile relationship that exists between the Electoral Commission and the political parties which are important stakeholders in the electoral process.

The Leader of the largest opposition party, NDC, John Dramani Mahama, urged them to be neutral despite the circumstances that led to their appointment.

“Some of the utterances of the new Chairperson and her Commissioners are not something that Ghanaians must take lightly. We need to call them to sit up and to show that they are neutral despite the crude way in which the previous Commissioner was removed.

“I mean they have been put there and so it is obvious they are going to be responsible for handling the next District Assembly Elections and the 2020 Elections. And so they must shape their public appearance to show that they will be neutral arbiters in this game and not partisan. I believe that some of the fights they are picking at IPAC are not necessary,” Mr. Mahama observed.

Sensitize School Children On Wearing Face Masks Before And A...
44 minutes ago