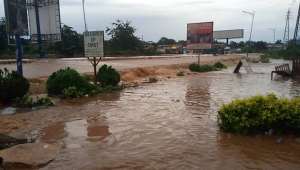 A taxi driver has been drowned in the Pelele River at Asawasi in the Asokore Mampong Municipal in the Ashanti Region following the torrential rain that hit the region on Monday, May 20, 2019.

The 32-year-old man, Kofi Appiagyei, also known as ‘Hello’, a resident of Asawasi, was drowned in the river in an attempt to cross the river during the rainfall, which started at 4pm, and lasted for two hours.

Kofi Appiagyei and his friends were coming from neighboring Dichemso community and mistakenly slipped and fell into the river. His friends’ attempts to rescue him but could not succeed due to the heavy downpour.

“I was in the house when my children came home shouting that a person has been drowned in the river. We came out to help but we couldn’t help,” an eyewitness told the reporter.

The mother of the victim, told the reporter, “Kofi told me he was going to some place with his friends before the rains, with the anticipation of coming home to eat. All that I heard was my son has been drowned, I came out and I saw people gathered around the banks of the river wailing”.

The rain caused havoc at Airport roundabout, where the Pelele river spilt over causing vehicular and pedestrians to a halt.