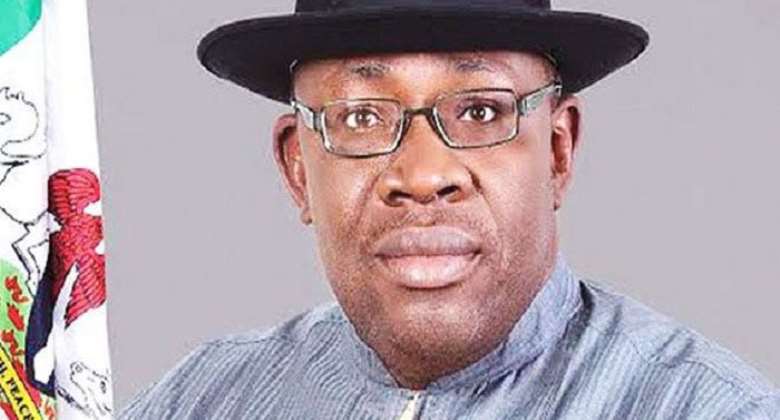 “Maintaining connections with family and community across class boundaries demands more than just summary recall of where one's roots are, where one comes from. It requires knowing, naming, and being ever-mindful of those aspects of one's past that have enabled and do enable one's self-development in the present, that sustain and support, that enrich. One must also honestly confront barriers that do exist, aspects of that past that do diminish. In Nigeria’s development endeavor, community development has been the missing link and the Restoration Administration is poised to bridge the gap”

Governor Seriake Dickson of Bayelsa State made an avowed commitment to take community development as one of the priorities of the Restoration Administration during his Second Tenure. This policy pronouncement was borne out of the extensive campaigns embarked upon by the PDP before the governorship election in 2015. Never in the history of Bayelsa politics has an incumbent Governor campaigned so vigorously, so purposefully and so tenaciously to sell his ideologies like a marketing scion – who solicited the electorate to look at the product (the Governor) and the price, in almost an endless, tortuous and nerve-wracking Community-to Community Campaign.

The initiative of the Restoration Administration to embark on Community-to-Community Campaign was to have a first-hand knowledge of the conditions of livelihood among the rural folks. The campaign was an eye opener in more ways than one. Governor Seriake Dickson beheld the peculiar developmental challenges of his people and saw the compelling need to address them. Community after Community, leaders and youths reeled out their genuine development priorities and almost all of them demanded immediate attention as soon as yesterday.

There is little need to recall that the Niger Delta Region of Nigeria presents a troubling paradox of poverty amidst plenty. The region is Nigeria’s main source of public revenue because it holds some of the largest oil and gas reserves in the country. Yet, States located along the Niger Delta suffer from higher rates of poverty compared to states in the southern part of the country. We have a gory picture of a region which suffers unimaginable environmental injustice and economic deprivation from a conspiracy of the oil multinationals and the Nigerian State.

In contemporary development discourses, Community
Development is advocated as a basic development strategy for attracting growth to the community. Earlier approaches at developing the Region were tokenistic, reactionary and did not include major stakeholders. MNCs practiced the flip-side of Corporate Social Responsibility; development Commissions/Agencies set up to mitigate the sufferings of the people were not holistic and ultimately these agencies were used to create internal strife and disharmony to stifle development. Communities, especially oil producing communities were deposited into the backwaters of modernity.

The traditional paradigm of community development was for a government agency to site projects with the exclusion of the stakeholders. The aim was to assume that the Community would buy-in to such projects without a pragmatic consideration for the skills of beneficiary communities to sustain such projects. Community persons were not trained to take charge of projects and absence of sustainability criterion made such projects to collapse into obsolescence. Ultimately, the so called development projects alienated the potential beneficiaries. They became a liability to such communities and were abandoned.

This is why you can see five water schemes in a community without anyone being functional. This is because there is a disconnect between the agencies that sited the projects and the end user communities. Lack of Community ownership has been a major obstacle in most community development projects.

There have been several efforts by Nigeria’s government, NGOs, international organizations and corporate social responsibility arms of multinational oil companies to improve the livelihoods of those living in the Niger Delta region. Unfortunately, many of these development efforts have been top-down and have failed to improve the situation in the region. In fact, the economy and environment along the Niger Delta continue to worsen, and issues of conflict and insecurity continue to escalate.

Realizing the limitations of these efforts, Governor Seriake Dickson has resolved to tackle the challenge of Community development head-on. The Restoration strategy will form networks and local associations, which will have structures that support collective action, enforce norms, generate expectations of reciprocity, and or foster feelings of mutual trust, they constitute a social capital.

Monies and other production in-puts will be distributed to those networks and associations with emphasis on community participation. The essence is to form social capital which views social networks more as a property of groups and communities than of individuals. Within close-knit groups, relationship of kinships, friendship and ethnicity can form dense networks of solidarity, cooperation and communal sanction that enhance development. This strategy fosters strong ties based on deep bonds of kinship and community can create trusts that enforce cooperative norms.

This is in addition to direct intervention in the provision of fishing equipment, farming implements, provision of occupational clusters for complementarity, provision of social amenities such as educational institutions, healthcare facilities, electricity etc to make life more meaningful for the rural folks. The “black box” of the Restoration approach is all-inclusivity, complementarity, clusters working in synergy, community-based development tracking model and measurement of development parameters upon which more investment will be made.

Already, the Izon-Ibe Microfinance Bank has been set up to provide loans while the Bayelsa Corporative Societies Bureau is well and alive. Governor Seriake Dickson seeks to unleash these creative potentials in Bayelsa youths, men and women preparatory to a post-oil economy. Today, it is commonplace to see the revitalization of general hospitals, building of health centres, schools, construction of water schemes and other projects that increase the well-being index of the people.

The Dickson Strategy will test the effectiveness of bottom-up or community-driven development (CDD) projects in Bayelsa State. With the establishment of “Growth Centres” in every Local Government, the efforts harnessed by Government will catalyze growth and spread to the clusters with its attendant spillover effect on the rural folks. When development is community-driven, stakeholders buy-in will be easier, it will make the rural people take charge of and dictate the pace of their development, determine their priorities and protect what has been put in their communities.

The bottom-up approach to be adopted by Governor Seriake Dickson will reduce poverty, grow income levels, create access to loan facilities for the establishment of small Scale Businesses and provide access to education and health facilities, clean water and other basic infrastructure such as internal roads, electricity among others. This will open-up opportunities in the Communities, increase the standard of living, and reduce ignorance and superstition.

The Izon-Ibe Microfinance Bank and the Bayelsa State Cooperative Bureau have important roles to play in this endeavor. In a bid to reduce the harsh effect of poverty, a lot of people have taken to small scale business among other steps. These small businesses, which often require less capital to start up, have the potential of providing reasonable income to enable the poor meet basic human needs. Nigeria is a country with numerous business and investment potential due to the abundant, vibrant and dynamic human and natural resources it possesses. A lot of people have always taken Nigeria to represent a paradox in development–that the country is rich but with poor citizens.

Considering the professed role of micro entrepreneurship as purveyor of development and the critical role of micro- financing in poverty reduction, it is pertinent that micro-credits should be easily accessible from the Izon-Ibe microfinance bank. In the past, micro enterprises were often hampered by inadequate capital resulting from rigorous and formal procedures and high collaterals required by commercial banks before loans can be granted to the poor. The Izon-Ibe Microfinance Bank will therefore provide much-needed micro capital and, thereby, significantly ameliorating poverty.

In the poverty eradication scheme of many countries microfinance banks serve as a means of empowering the poor and providing a valuable tool to assist the economic development process. More so the bottom-up approach encourages self-employment projects that can generate income to mitigate the devastating effect of rural poverty on the people. There is immense power when a group of people with similar interests gets together to work toward the same goals. When individuals and communities do not govern self, they risk being ruled by external forces that care less about the well-being of the village. This has been the trend over the years in Bayelsa Communities for the past five decades.

Nigeria now faces dire economic challenges in all facets of life, but as soon as the clouds evaporate, the Contiman Governor I know will walk the talk. With this pragmatic zeal and consummate desire to move the State forward, Bayelsans can only expect better days ahead. Governor Seriake Dickson’s approach to community development will be a huge success considering the fact that the infrastructure for community regeneration have already been put in place and Bayelsans are not unwilling to seize the opportunity to grow small scale businesses and pursue entrepreneurship. With the Senatorial roads linking the growth Centres, and economic clusters coupled with the production of an avalanche of social infrastructure, the Restoration Community Development paradigm will succeed and the obstacle of finance will be addressed sooner than later.

Our SinoHydro road projects has silence NDC, when we talk th...
8 minutes ago

Let's go on our knees and pray for Akufo-Addo for God's inte...
35 minutes ago