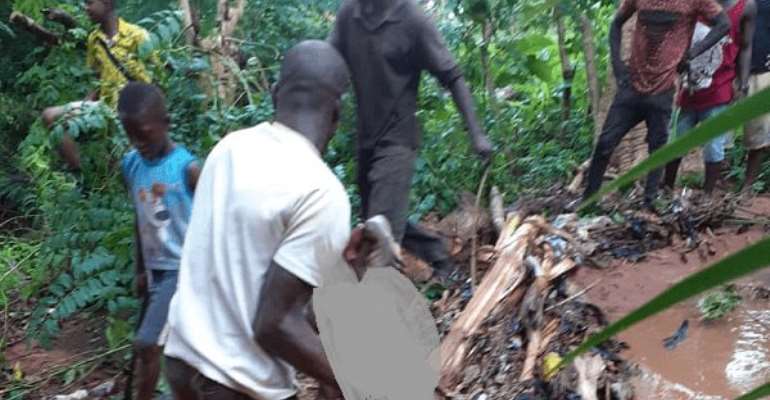 One of the children being taken out of the flood.

Grief hit family at Jema in the Kintampo South District of the Bono East Region when two siblings were washed away by rainwater in a gutter during a downpour that hit the town on Wednesday.

The siblings, Adwoa Fosua, eight, and George Koranteng, four, were playing in the rain at about 3:30 p.m. when they were dragged by the strong current of the rainwater.

The lifeless bodies of the two, which were retrieved by the police and a team of local people, have been deposited at the Jema Hospital Morgue awaiting autopsy.

The Bono Regional Police Public Relations Officer (PRO), Chief Inspector Augustine Kingsley Oppong, confirmed the incident to The Mirror and explained that the police received a call informing them that Fosua and Koranteng had been washed away during the rainstorm.

He said the police followed up and together with a team of the local people at the far end of the gutter, retrieved the lifeless bodies of the siblings.

“We were informed that the two children were playing outside their house when the incident happened,” he stated.

Reports from the town indicate that the downpour happened suddenly and made it difficult for the children who were playing outside their house to escape.