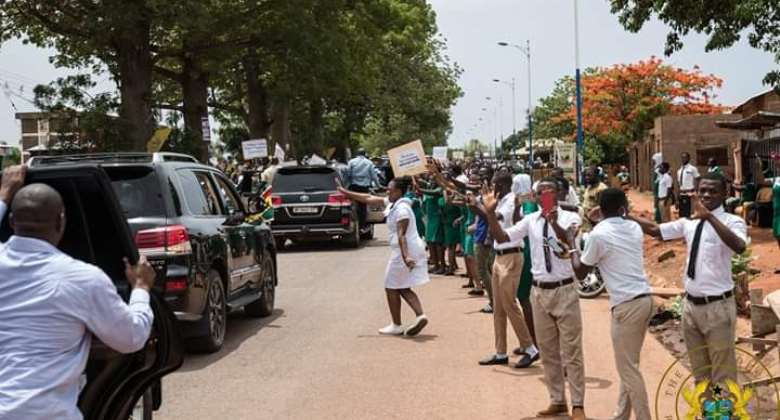 The principal of the Damongo Nursing Training College (NTC), Hajia Iddrisu Rabiatu has threatened to block the monthly allowance of students in the school if they do not line-up on the principal streets of Damongo to welcome the President Akufo-Addo into Damongo.

The Principal issued the warning on Friday pending the President's visit scheduled on Saturday.

Majority of the students have expressed ultimate surprise at the pronouncements of the Principal since they have not mentioned anywhere that they will not welcome President Akufo-Addo into the capital.

The President is expected in the Savanna region for a two day tour.

He is expected to cut the sod for the construction of a Regional Coordinating Council and also present some eight vehicles to the coordinating council in Damongo.

He will also visit the Daboya and Sawla towns all in the newly created regions.

The TEIN Damongo NTC issued a press release expressing their displeasure about the actions of the Principal.

Below is the full Press Statement issued by TEIN NTC Damongo.

Honourable members, greetings from the leadership of TEIN-Damongo NTC as we wish to expell our displeasure on the empty propaganda, political persecution and political threats being whipped on NDC supporters in the Nurses Training College, Damongo.

We are saying this because, our principal this afternoon call us on an emergency meeting today, Friday ordering all students to dress in their uniforms tomorrow Saturday and line up on the principal street to welcome the president to Damongo.

Honourable members, this statement fell heavily on us NDC supporters. This political scoring point of we being forced to line up the street is machination to let it look like all nursing trainee students have thrown their support behind the NPP party.

But, we are talking from the authority that despite the token being paid as allowance has not decreased even a single aorta of our support base on campus

Also, we TEIN in Damongo NTC are burning fiercely as our principal threatening us that they shall be a program organized by the government in Damongo township on Sunday and it's compulsory for every student to attend the meeting or you would be blocked from receiving the token which they described as allowance.

Honourable comrades, this is pure political persecution and must be stopped.

We want to use this opportunity to charge our various communication officers to expose this cheap politics the NPP is doing in this country.

Finally we in the TEIN NTC DAMONGO, still stand firm on our core values and nothing tickles us from pursuing our political agenda on campus. This piece is to inform you of the dirty politics being done by the NPP through our Principal in Damong NTC.