Human Trafficking Menace And The Police Resolve To Stem The Tide 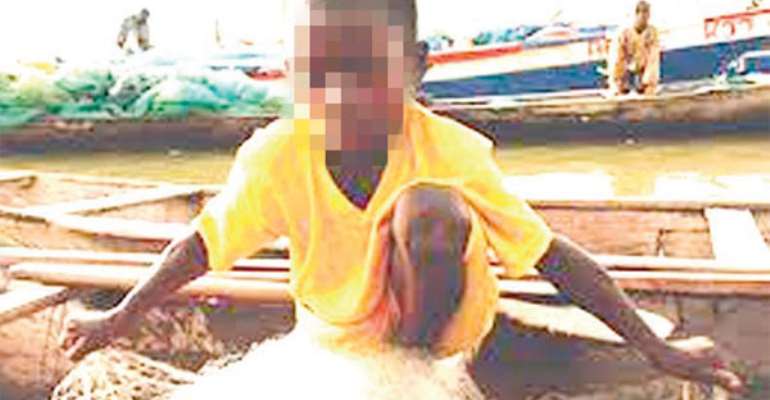 CKobby, a ten-year-old victim of child trafficking, was rescued last year from engaging in fishing.

Taken from his mother (Ama Attah) in Winneba in the Central Region of Ghana, Kobby was sent to Azizanya in Ada to fish until he was rescued by the security agencies.

Kobby dropped out of Adawukwaa DA Basic School while in class four due to financial constraint. He says he engaged in menial jobs along the coast to make a living when his mother decided to let him travel with her friend.

“My mother told me that since I was not attending school, she will give me to a friend to go and live with and that friend will take me to school but when I arrived, I found out that there would be no school for me because every day we went fishing,” he narrates.

Since Kobby already knew how to swim, diving into the Volta Lake to untangle trapped net was not a problem for him as compared to other children also working on the lake.

“We often leave the house at dawn with our masters to fish and return around 9:00am in the morning to sell our fishes to the fish mongers, but in the afternoon, we mend torn-out nets and move again in the evenings to set traps,” he states.

Kobby stayed with his 'master' for a year without hearing from his mum and other siblings until his was rescued by the police.

But for the timely intervention by the police, Kobby's dream of becoming a police officer would have been shattered.

“When I was young, I had a dream of becoming a police officer and now, my dream will become a reality as I am back to school … (sic) … I am very happy.”

Tricks On The Sea
Kobby reveals that most of the children working on the Volta Lake are school drop-outs.

He says while some are assisting their parents in fishing, others are victims of child trafficking.

“The rescue team always comes around but our masters always advise us to jump into the sea when we see them approaching us,” he adds.

“Sometimes when they talk to us, we often lie to them that we live with our parents and we did this because we were afraid that we would be blamed when the police arrest our 'masters,” Kobby added.

Sources Of Human Trafficking In Ghana
The police have identified regions along the coast and the Eastern Region as a haven where these children are often trafficked from.

Police reports have revealed that while some parents ignorantly give away their wards to the middlemen of these 'masters' under the pretext of enrolling them later in schools, others negotiate with the 'masters' for a fee as low as GH¢300.

The Director of the Anti-HumanTrafficking Unit,Superintendent Mike Baah,says most of the rescued children are from the coastal areas, hence the need to intensify education in those areas.

National Efforts to Fight Human Trafficking
To address the challenges of trafficking, the government of Ghana has taken steps in implementing key policies, legislation and programmes to address the needs of victims and to punish perpetrators.

A report on the 'National Plan of Action for the Elimination of Human Trafficking in Ghana', outdoored by the Ministry of Gender Children & Social Protection two years ago, reveals that these measures seek to address the root causes of trafficking and provided an inclusive approach for tackling human trafficking in Ghana.

The report showcases government’s efforts in combating human trafficking, including implementing a national anti-trafficking plan, prosecuting and convicting an increased number of labour and sex traffickers, and increasing cooperation across anti-trafficking government agencies.

Rescue Operations
The Anti-Human Trafficking Unit of the Criminal Investigations Department (CID) says it is making strides in the prosecution of offenders of human trafficking in the country.

Reports have shown that its performance in rescuing trafficked victims, especially children, is increasing daily since the establishment of the unit a decade ago.

A total of 18 convictions of offenders of human trafficking were made in 2018 as compared to four in 2017, according to Superintendent Baah.

He says out of the number, eight of the convicts are females while the rest are males. 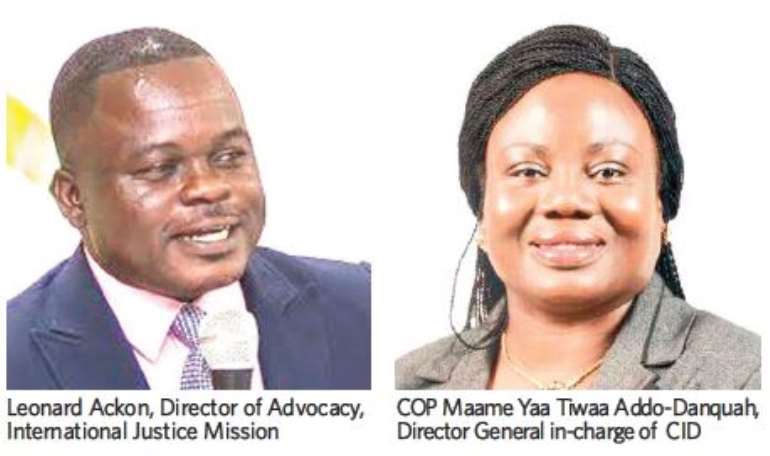 “Most of the convictions we had were on offenders of child trafficking, meaning Ghana is making strides in the fight against this menace,” he explains.

The police, according to Superintendent Baah, charged with the responsibility of internal security of the country, work in partnership with government agencies, including the Ministry of Gender, Children & Social Protection, Social Welfare and non-governmental organisations like the International Justice Mission (IJM), in rescuing victims of human trafficking.

He indicates that the rescue mission works in different forms and share information of the whereabouts of the victims and the ordeal the victims go through.

“We then go undercover to assess their situation before finally moving in to rescue the victims involved. In some cases, we also rescue victims of forced marriages, bonded labour, among others.”

The International Justice Mission (IJM), however, reveals that most of the children working on the Volta Lake are victims of child trafficking.

The Director of Advocacy at IJM, Leonard Ackon, says the mission's findings show that most of the children involved in fishing on the Volta Lake were trafficked.

He adds that majority of these children, aged between three to 10 years, are enslaved and forced to do hard and dangerous work to earn a profit for their masters.

“These victims are forced to wake up at dawn, taken to the lake, dive down into the dark water to untangle fishing nets by their 'masters' regardless of the hazards awaiting them.

They work for long hours, with no opportunity to go to school, lack good healthcare when they get hurt in line of their duties but are subjected to violent beatings and without food,” he laments.

He adds that IJM works in four areas and these include partnering the police to locate the children being held as slaves on the Volta Lake and help to bring them to a safe place.

“We also support the police to collect evidence by assisting public prosecutors through the court processes and finally help the survivors heal from their trauma while finding a safe place where they can live before finally reintegrating with their family. We also support them in their education, or job training,” he stresses.

Meanwhile, the IJM has also pledged its commitment to carry out education in these areas.

Police Commitment
The Director General of the CID, Maame Yaa Tiwaa Addo-Danquah, pledged the police commitment in the fight against human trafficking in the country.

“Ghana’s fight against human trafficking has received an international recognition as the latest Trafficking In Persons (TIP) has upgraded the country’s Tier 2 Watch List to a Tier 2, ranking in the 2018 TIP Report,” she discloses.