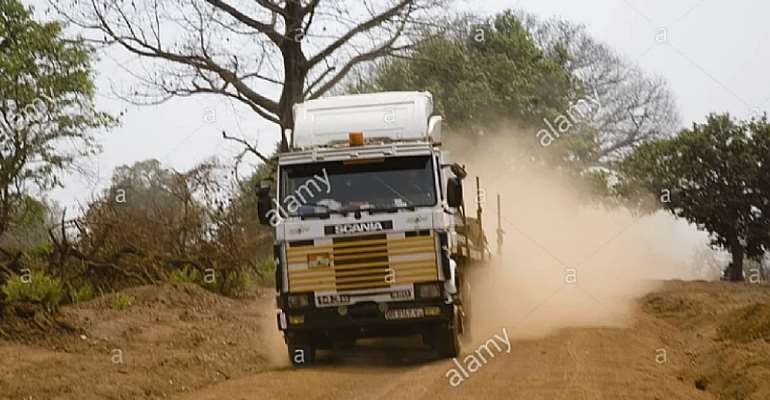 some vehicles on dusty road at Gambaga in North East

Residents of the newly created North East Region, have expressed bitterness over Assembly's decision to gravel the untarred roads for President Akufo Addo tour of the region instead of making the effort to tare and asphalt them.

Information reaching Modernghana from the North East region indicates most of the residents are not enthused when President Akufo-Addo visited the region as part of his 6-day tour of the Oti, North East and Savannah Regions.

Following the President tour to the new regions, most of the dusty roads were reshaped by the Districts Assemblies to make easy for his movement.

But the residents expressed their frustration about the bad nature of the roads couple with health hazard and mess they would have to go through plying the dusty roads after the President's tour.

For them, since the President was coming and the government through the District Assemblies have to gravel the roads, they should have simply maintained the roads by using asphalt considering the health hazards to their lives.

"This is a terrible situation, if the president is coming and there is the need to work on the roads, then the assemblies should have used the opportunity to tare the roads, for they also need tarred roads," some of the residents told this reporter.

Some of the residents are of the view that the President should have been allowed to travel on the bad roads to have a feel of what they have been going through inorder to take his decision based on his experience not through demo and petitions.

It is common knowledge that those who live by the non-tarred roads are suffering from cardiac problems due to the constant inhaling dust. Those who are already suffering from eye infections and congested lungs get more infections day by day.

This, the residents appealed to the government to take action to avert possible respiratory problems among the people living along the bad roads in the North East Region.