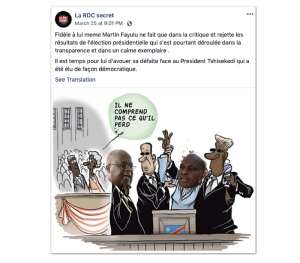 Modern Ghana has gathered that Facebook has canceled several accounts of an Israel-based group suspected to be involved in the spread of fake news and propaganda to manipulate and interfere in electoral outcomes in African countries and countries in some parts of Asia.

Facebook in a release on Thursday, May 16, 2019, indicated that it has banned the Archimedes Group, believed to be behind influenced campaigns aimed at disrupting elections in various countries and has cancelled several of its accounts that engaged in the spread of fake news.

They are said to pose primarily as political candidates and peddled fake news about elections in countries which have least suspected there were other interested parties behind the disinformation which mostly went viral on the spare of the moment.

They used fake accounts to run some of the least suspicious pages which posted information concerning local politics, elections, candidate views and criticisms of political opponents which in a subtle manner sway the minds of unsuspecting followers.

The activities of the group which originated from Israel, was focused on countries such as Nigeria, Senegal, Niger, Togo, Angola and Tunisia among others.

According to Facebook’s Head of Cyber Security Policy, Nathaniel Gleicher, the tech giant had removed about 65 accounts, 161 pages and dozens of groups linked to the group.

“It has repeatedly violated our misrepresentation and other policies, including by engaging in coordinated inauthentic behavior. This organization and all its subsidiaries are now banned from Facebook, and it has been issued a cease and desist letter,” it added.

According to him, the fake pages and accounts linked to this group had been able to gather about 2.8 million followers with hundreds of thousands of views.

It was found out that the group had spent an amount of $812,000 on advertisement on Facebook between December 2012 and April 2019.