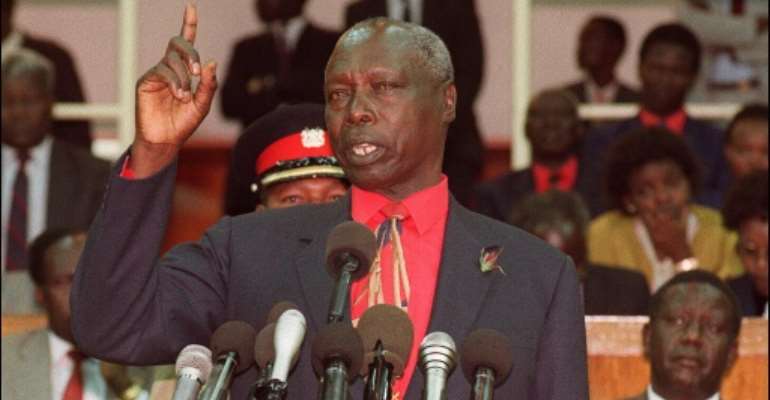 A court in Kenya on Friday found former president Daniel Arap Moi guilty of land grabbing, and ordered he pay part of nearly $10 million to the rightful owners of a property he sold.

Judge Antony Ombwayo said there was "no iota of evidence" that Moi, now 94, legally owned the property he sold to a timber firm in 2007.

The judge in the Eldoret High Court in Kenya's west, said he could not "protect property that was acquired through impropriety".

Lawyers for Kenya's second president -- who ruled with an iron fist between 1978 and 2002 -- insisted the 53-acre tract was rightfully Moi's to sell, but were unable to convince the court.

Ombwayo upheld a claim by the wife and son of the late Noah Kipngeny Chelugui, a local chief who had accused Moi of abusing his position to seize the property from him in 1983.

Chelugui, who died in 2005, said Moi used government land officials to transfer the property deed into his own name.

The land was sold to Rai Plywoods (Kenya) Limited in 2007, the timber company told the court.

"This court finds that the petitioners were illegally dispossessed of the suit land," Ombwayo ruled.

He ordered the former president and Rai Plywoods to pay 1 billion shillings ($9.9 million//8.86 million euros) to Chelugui's family in compensation.

Moi succeeded Kenya's first president, Jomo Kenyatta, upon his death in 1978, fighting off rivals in a bitter contest for the top job.

His rise to power heralded Kenya's descent into a single party state, with the multi-party system crushed and critical voices tortured or jailed without trial.

Moi's rule was marked by high-profile corruption scandals, with accusations that he and a powerful worked state institutions to their illegal gain.

In 1992, under international pressure, Moi agreed to the first multi-party elections in 26 years. But they erupted into tribal chaos in which some 2,000 people killed.

Moi, finally defeated at the ballot box by Mwai Kibaki in 2002, would later ask Kenyans for "forgiveness" for the wrongs he had committed.