Input Subsidies In Mozambique: The Future Of Peasant Farmers And Their Seed Systems 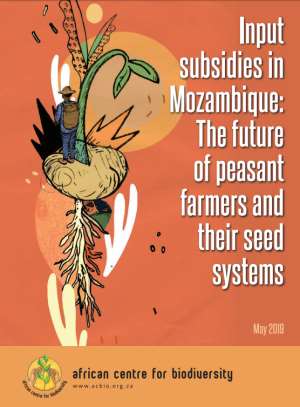 In this report, the African Centre for Biodiversity outlines and assesses input subsidy programmes in Mozambique, as part of the larger agriculture policy landscape, and the impact this has had on the agricultural sector, particularly on smallholder farmers.

In Mozambique, peasant farmers feed the country mostly using their own seed. Yet the majority of (donor-funded) government initiatives are driven externally, either in the form of relief programmes or export-oriented commercialisation and value chain integration.

Farmers in Mozambique face a range of environmental and economic risks that are compounded by climate change. Drought and flooding are the largest agricultural risks.

In the aftermath of the devastation caused by cyclones Idai and Kenneth – storms of intensity and frequency never seen before in the region – the government needs to support efforts that not only adapt to these increasing pressures but also create more resilient agricultural and food systems.

Following such disasters, seed becomes a key challenge, with questions about where seed will come from for the next growing season. Many farmers have lost their harvests and therefore a big portion of their seed, while seed storage and distribution infrastructure has been destroyed. This presents key challenges for food security, which Green Revolution responses only deepen through perpetuating reliance on foreign seed aid and profit-seeking multinationals.

We urge government and donor support for the multiplication and dissemination of public sector and farmer varieties, to build the domestic seed production with the participation of smallholder farmers.

As climate change intensifies in the near and medium term future, efforts are required to build flexible and responsive seed networks. Many efforts that can be supported and built on are already in motion, as indicated and briefly described in this document.

This report is available in English and Portuguese