From Galamsey To Rosewood 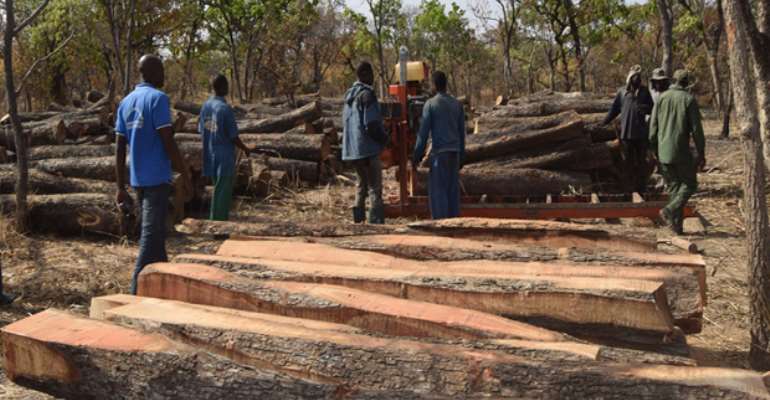 They first set their sights on our gold and after taking part in a record devastation of our water bodies and environment from which we are yet to recover, they have turned to rosewood trees.

The Chinese are dealing with the latter with such vengeance and gusto we can bet they fear the trees are on the verge of extinction.  Of course, considering the impunity with which they are felling the trees and the rate at which they are doing so, the days of the trees could be numbered. That is the scary reality staring us in the eyes.

The graceful-looking trees and their distinct scent stand them apart from others, their qualities making them much-sought-after species on the world market. Their dwindling numbers have pushed them into the bracket of the endangered hence their protection. In Ghana, however, the protection is not enough to deter preying Chinese from pouncing on them with state-of-the-art felling gadgets.

The Chinese in Ghana are as determined to wipe off our rosewood trees and trample upon our laws as they are waging a trade war with America.

We do not doubt the possibility of their success in that direction because some chiefs and individuals are ready to help fell the treasured trees for pittances.

A story about another batch of rosewood trees intercepted by the police and belonging to a Chinese concern is a measure of just how much disdain they have for our laws and systems. At first, it was Aisha's sister and even before the legal procedure could be exhausted after her arrest, she has jumped bail.

Had it not been for the readiness of some locals to front for them or even collaborate with them to degrade our environment, they could not have gone to that extent.

In the past fortnight, there has not been a dearth of rosewood stories in the media all about how the trees continue to be on the firing line of Chinese businessmen.

When we fail to stop them and others engaged in the illicit felling of the rosewood trees and others, this beautiful flora would no longer be part of our geography. Posterity would not forgive our generation of Ghanaians under whose watch the God-endowed trees were wiped out not by Ghanaians but Chinese.

In Ghana, foreigners can breach the law because enforcement mechanisms are lax and our hospitability good to a fault. We are quick to welcome foreigners even if their mission in the country does not inure to our benefit.

We have learnt about how locals in some instances are those who go into the forest to cut down the trees for their Chinese masters.

The Forestry Commission might have to adopt a different approach to manage our forests especially such endangered ones as rosewood trees. As for the Chinese, it appears they aren't going anywhere yet.