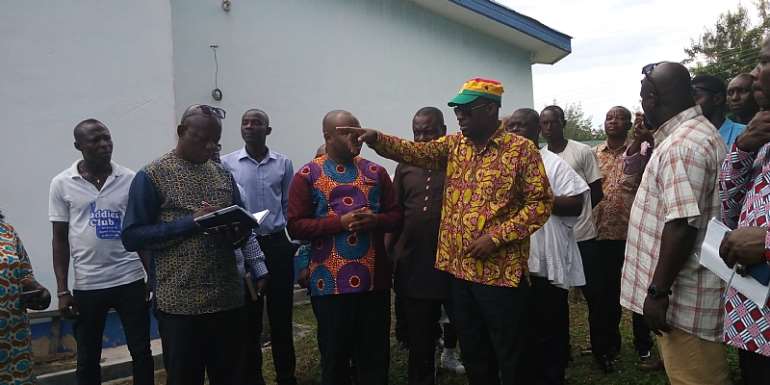 The Western Regional Minister, Hon. Kwabena Okyere Darko-Mensah has pledged to establish a coconut refinery in the Jomoro Municipality to improve coconut production.

The Regional Minister made this assurance during a two-day visit to the Municipality to familiarize himself with problems facing the area and also to explain government policies to the Chiefs and people.

He bemoaned how the coconut farmers send the raw materials to Nigeria to boost their economy.

He said the time has come for the country to have its own coconut refinery to add value to the product.

"The NPP government is committed to establishing a coconut refinery in Jomoro here to change the raw form of the product into finished products and also to boost the local economy. Coconut is very important and we have to add value to it", he said.

The Minister said the establishment of the coconut refinery will create a lot of jobs for the teeming unemployed youth in the area and Ghana as a whole.

He revealed that government is going to produce 5 million hybrid coconut seedlings in Western Region.

He added that coconut from the hybrid cmseed would mature within a period of three years time when planted.

The Minister said Jomoro and Ahanta West Municipalities have been chosen as the areas to nurse the 5 million seedlings.

He indicated that the initiative is under the Government's Planting for Food and Export for Rural Development (PERD).

On his part, the Municipal Chief Executive (MCE) for the area, Hon. Ernest Kofie called on the farmers to embrace the Planting for Food and Export for Rural Development (PERD) programme.

According to him, his outfit has already started sensitizing the farmers about the new variety.

According to him, it appears investors and corporate entities in the country had lost sight of the economic value in the processing and sale of coconut related products.

He added that Jomoro Municipality was noted for the production of coconut oil for the local market.

He said the refinery, when established will production of coconut oil in larger quantities to be supplied locally and international.

He promised to liaise with the coconut farmers to set up Watchdog Committee to protect their existing farms to boost production.

The MCE calls on investors and corporate entities to take advantage of the One District One Factory program and set up factories to fully tap into the resources in the Municipality.

He reiterated that "Jomoro Municipality is expecting more than One Factory, because aside from coconut which is in abundance in the Municipality, Jomoro also has oil and other cash crops. Therefore, investors should take advantage of the policy of One District One Factory and troop into the Municipality and set up factories to leverage on these resources".

He, however, asserted that his office was opened to welcome investors, and assured of providing a business friendly environment for businesses to strive.

The Executives of Nzema Coconut Farmers expressed their profound appreciation to the Regional Minister for the effort to boost their trade.