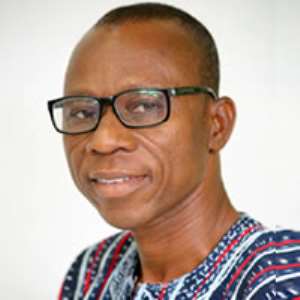 Hon Andrew Dari Chiwitey, a member of Works and Housing Committee of Parliament has lampooned the Akufo Addo Presidency government for the suaviloquent talks over the Nima-Mamobi housing project.

He says the move is yet another big English grammar to deceive Ghanaians ahead of the 2020 elections.

Chiwitey who is the Member of Parliament (MP) for Sawla/Tuna/Kalba constituency said, the New Patriotic Party (NPP) has the appetite of whispering sweet grammar in the ears of Ghanaians rather than developmental projects.

The Minister of Works and Housing, Mr Samuel Atta Akyea has announced the Nima-Maamobi will be given a facelift when he took his turn at the Meet the Press in Accra on Tuesday, May 14.

He told Journalists the Nima /Maamobi slums communities would be upgraded into a world-class residential enclave, which would be distributed free of charge to the residents.

According to him, the project is expected to commence this year and would give meaning and beauty to the President’s vision of Inner City and Zongo Development to transform slum communities into modern residential enclave.

Nima and Maamobi are highly populated slum communities lying in the heart of the capital, Accra, with people of diverse ethnic backgrounds coupled with poor drainage systems and sanitation challenge.

But speaking to Modernghana, Mr Chiwitey said, even though he is not against the people of Nima and Maamobi getting decent houses, he believes the NPP government is embarking on another deceptive policy.

"If you ask the Minister what the government have achieved so far in the housing sector, he cannot point out a single project after two years in power," he intimated.

He continued, "if the government was mindful of providing houses for Ghanaians, the Ministry should have taken steps to complete some of the abandoned housing projects initiated by previous governments."

"I am not against the people of Nima getting good houses or flats to live, but my concerns are that the current government appears not be serious in the housing sector. The Akufo Addo government is being in power for over two years now, have you seen any steps taking anywhere to complete those houses?

"Even if they will not complete those houses that the NDC under Mahama started, what of those affordable houses that started under President Kufuor?, Many of these houses are left uncompleted at Wa, Kumasi, Tamale and Accra, "Mr Chiwitey emphasised.

Equally appalling is that of the Saglemi Housing project, which he said the current government allow over 600 completed housing unit to go waste yet they are looking for developers to breakdown people houses to rebuild.

The Sawla/Tuna/Kalba lawmaker also questioned the mechanisms government has put in place to relocate the Nima /Maamobi people before embarking on the project.

He stressed that the cost of the entire project and relocation of the people in the two slum communities remained unknown.

Furthermore, Mr Chiwitey said, Ghanaians are already aware of Akufo Addo administration has failed to implement a single housing project in any part of the country in the last two years of governance, but always resorting to lies, blame passing, beguilements, deception and contrivance.

He noted that, instead of the government seeking funds to complete the abandoned housing projects to mitigate the housing deficit situation in the country, the Akufo Addo government is subjecting itself to more public ridicule of initiating projects which are not possible now.

The MP said governance is a continuum which requires that the current government continue from where predecessors left off but not to abandon such a huge investment project which was financed by taxpayers.

The Sector Minister told Journalists, the project engineering would be presented to Cabinet soon for consideration, and upon approval, construction works would begin while an orientation and sensitization exercise would be organised for the residents to ensure smooth implementation.

He said is part of efforts to bridge the over two million housing deficit in the country, indicating the government would build 250,000 housing units, every year, for the next eight years.

He mentioned some of the stalled social housing projects in areas such as Borteyman, Kpone/Tema, Asokore-Mampong, Koforidua, Tamale and Wa, explaining that no arrangement was made by the National Democratic Congress (NDC) to continue with the affordable housing undertaken in Wa, Tamale and Koforidua.