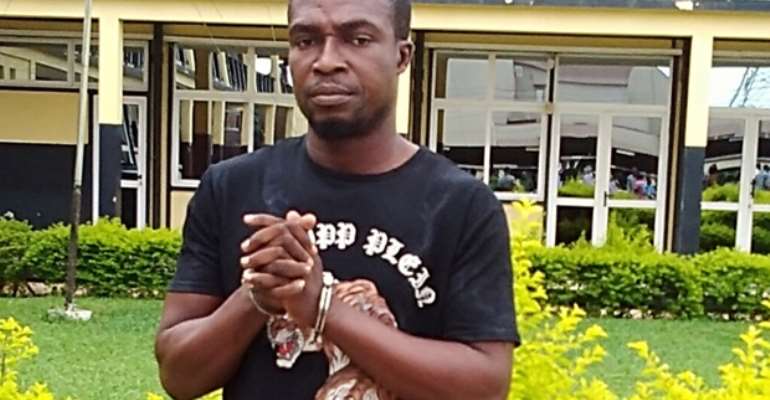 A 33-year-old driver, Kwadwo Korankye believed to be a member of a car snatching syndicate which operates in the Ashanti Region and other parts of the country, has been arrested by the Ejisu Police.

The police arrested Korankye shortly after the gang attacked some guests of Asantehene, Otumfuo Osei Tutu II, who were returning to their hotel at Ejisu after attending a dinner at the Manhyia Palace in Kumasi on May 5, 2019.

Ashanti Regional Deputy Police Commander, DCOP Frank Adu Anim, mentioned other members of the gang as Mallam, Osman and Joe, who are currently on the run.

The police chief told a press on Monday that Korankye, a resident of Ahenema-Kokoben and his gang who were onboard a blue Opel Astra car, attacked the people on board a Mitsubishi Pajero 4X4 with registration number GS 2975-17 and a Toyota Hilux pickup (GR 9043-17) at gunpoint at Ejisu.

According to him, the gang robbed the occupants of their money and personal belongings before snatching the two vehicles.

DCOP Anim said the attack, which occurred on Sunday, May 5, 2019, took place at the entrance of their hotel.

“A report was immediately made to the Ejisu Police which issued a look-out message to all police patrol vehicles, checkpoints and barriers on major roads across the country for necessary action,” he narrated.

The police commander added that both vehicles were later abandoned at Kadriso, near Kintampo, on the Kintampo-Tamale highway.

Korankye was subsequently arrested by police with assistance from residents of Kadriso community, but his accomplices managed to escape.

DCOP Anim asserted that Korankye led the police to retrieve some of the stolen items at Sakra Wonoo, near Bonwire in the Ashanti Region.

He's currently in the custody of the police assisting in investigations.