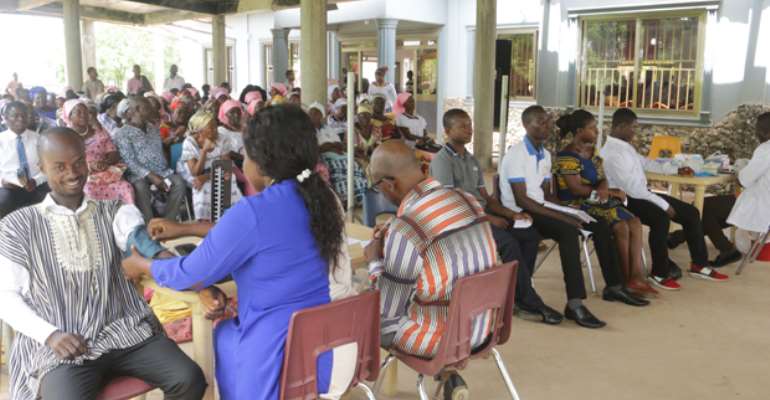 Some residents taking their turn in the health screening exercise.

The high rate of unsafe abortion at Doryumu, a deprived community in the Shai-Osudoku District of the Greater Accra Region, is purportedly killing teenagers who resort to unorthodox means to get unwanted pregnancies terminated.

The rate at which the community has been invaded by foreigners from neighbouring countries such as Benin, Mali and Niger with unlicensed Chinese medicines and concoctions for terminating pregnancy is alarming.

Residents of the area have expressed worry over the unpleasant issue, calling for the arrest of the drug dealers to put an end to the situation.

The laws of Ghana allow for abortion only under extraordinary circumstances such as incest pregnancy, pregnancy of a female idiot or mad female and pregnancy resulting from rape.

Abortion is also allowed when healthcare workers determine that the baby if born will not be able to have a meaningful life and pregnancy that threatens the life of a woman if she continues to carry it.

However, women, mostly teenagers, at Doryumu prefer buying unorthodox medicine from the foreigners who patrol the community with bags of concoctions and Chinese medicines to terminate unwanted pregnancy.

This was made known over the weekend during a health screening exercise organised by Naa Teley Foundation, a non-profit organisation in the area.

Rev. Daniel Otoo Ackam, District Pastor of Afienya-Asutuare District of Assemblies of God, Ghana who expressed worry about the situation appealed to teenagers in the community to desist from practising abortion.

According to him, most of the teenagers are not ready to become pregnant and think the only option is to get concoction from the black market to do illegal abortion and they sometimes mess up their lives.

He observed that the demand for abortion is fuelled by the availability of black market or illegal medicine hawkers who patrol the community every day; he called for their arrest to curb the situation.

However, Dr. Bernice Borteley Bornnai, Chief Executive Officer of Naa Teley Foundation, called for the intensification of sex education and education on contraceptive methods which can help them to prevent unwanted pregnancies.

According to her, Naa Teley Foundation has taken upon itself to embark on post abortion family planning counselling services in the Doryumu community to help the country in terms of meeting the Sustainable Development Goals (SDGs).

High attendance on first day of parliament's 3rd meeting of ...
3 minutes ago