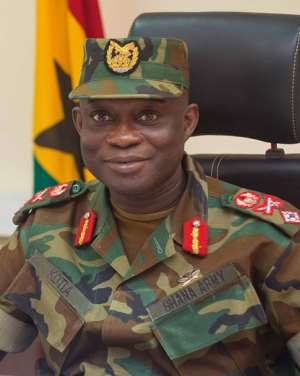 He said the volatile nature of the terrorist's recent activities in our close neighbouring country could spill over our porous borders if care is not taken.

The security expert has therefore urged the security agencies to beef up security in churches and across all public places especially, the country's borders.

Burkina Faso has been a hotbed of terrorist attacks in the last few days where churches have been a target for the terrorist elements believed to be related to the ISIS terrorist group.

Following reports of another attack in that country just a day ago where Reuters is reporting that some four Catholics have been killed with the mutilation of the statue of the Virgin Mary, the security expert has advised that the state and churches should start taking precautionary measures against any such incursions in the country.

Speaking in an interview on the Super Morning Show on Joy FM with host Emmanuel Dazie on Wednesday, May 15, 2019, Brig. Gen. Dr. Kotia called on state security, church leaders, church members as well as the general public to be on alert about any suspicious characters lurking around church premises and public places.

He urged the churches with internal security arrangements should take extra precautionary measures.

“If the churches have their own security arrangement, they could keep a watch on such people when they come in. You should look at the way they behave. The suspicious behaviours and the type of vehicle they come along with and where they are parking. Indeed when you talk about car bombs should be careful which vehicles come within the perimeter of the churches,” he urged.

The security expert also called on the church leaders and pastors to educate the congregation about what to look out for and what to do under any such circumstances.

“It is important for us to make the education within the churches. All the members of the congregation need to be alert and to open up their eyes so that they will be able to detect any suspicious movements within and outside the church,” he advised.

The Brigadier General also advised the general public to be extra curious about the activities of strangers and suspicious characters and alert the security should they find anything unusual in the society.

“Generally everybody in the country and not only the churches must be very alert and just observe the movement of suspicious human beings who come around. You need to give visitors who are in town, close watch. You need to alert the intelligence of the security in that regard,” he indicated.

Brigadier General (Dr) Emmanuel Wekem Kotia is currently the Commander of the Western Sector of the United Nations Stabilization Mission in the Democratic Republic of Congo. His last appointment was the Deputy Commandant of the Kofi Annan International Peacekeeping Training Centre (KAIPTC), Accra, Ghana.