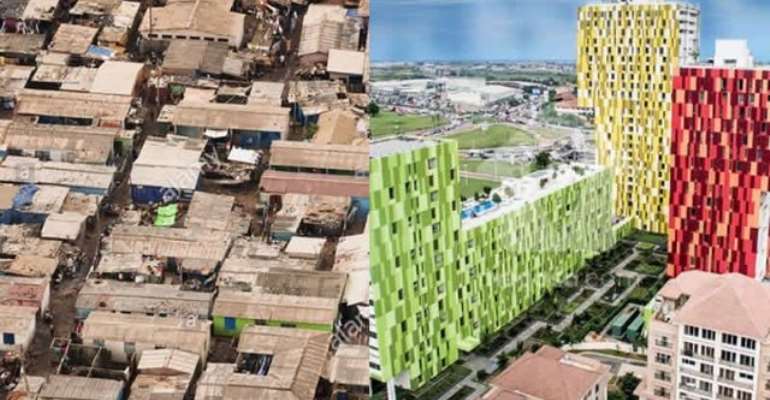 The Works and Housing Minister, Samuel Atta Akyea said that the redevelopment of the Nima and Maamobi will give meaning and beauty to the President’s vision of Inner City and Zongo Development.

He told the press Tuesday that to achieve that government “is collaborating with the Lands and Zongo Development Ministries to turn the approximately 1,039 acres of prime land into a world-class residential enclave.”

The Akim Abuakwa South MP stressed that this will be done “without dislodging our good people who currently dwell in Nima and Maamobi.”

Ghana’s housing deficit is currently assessed as well over two million and whereas the annual housing requirement is about 250,000 units, supply figures are about 45,000 units per annum, holding all factors constant.

It is in the light of this, that government says it is embarking on a housing programme aimed at facilitating the construction of 250,000 housing units yearly over the next eight years, through Public Private Partnership (PPP).

Explaining government’s Revised Redevelopment Scheme, the Minister said, “the philosophy underlying the concept of replacing slum building with modern houses, on the same plots of land is to substantially improve the physical environment at virtually no additional infrastructural cost.”

He added that it is also intended to reduce government expenditure on infrastructure and services to developing areas.

Even though Nima and Maamobi routinely suffer from inadequate provisions of basic facilities such as housing, water, electricity, and drainage systems, the communities continue to grow.

The President’s commitment to slum upgrading of Nima and Maamobi was stated forcefully in his message of the State of the Nation eloquently delivered to Parliament this year.

Plans according to Mr Akyea the value of the land to be developed will be determined by the Lands Commission on Market Value basis – fair and equitably.