Helen Huang 'Ghosting' Around Tumu Over Her 30 Containers Of Rosewood 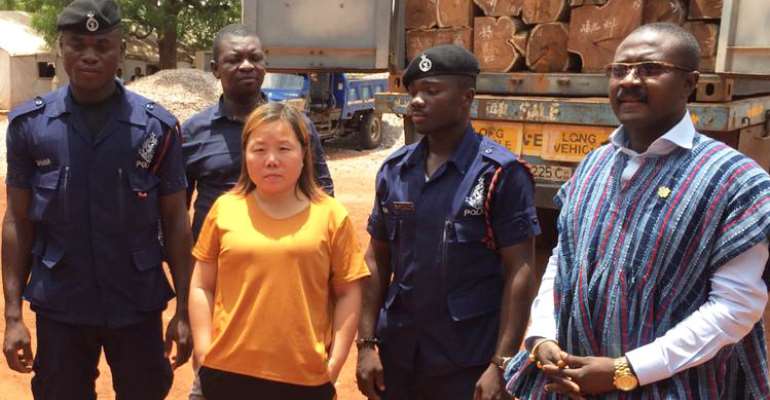 While the Police is still searching for the whereabouts of Helen Huang, the Chinese national who jumped bail last week in connection with the smuggled trucks of banned rosewood timber, a Daily Guide publication reports that the 43-year-old Chinese woman hiding around Tumu in the Upper West Region.

According to the May 14, 2019 edition of the Daily Guide Newspaper sighted by ModernGhana, Helen Huang has been frequenting Tumu where the story claims she has some extra Rosewood stashed into some 30 containers waiting to be carted out of the country.

“Police intelligence earlier indicated that Helen Huang escaped to Togo after jumping bail in Tamale, but the newspaper publication claim she has been frequenting Tumu, according to another police source.

The Paper also claimed that the Chinese national stated in her caution statement to the police after granting her police enquiry bail that she had 30 containers of the banned product in the country.

“She said in her statement that she has 30 to 40 containers,” the paper said.

Helen Huang was arrested by the Tamale Regional Police Command for alleged attempt to smuggle large quantities of illegal rosewood timber stashed into two 40 footer container trucks being transported out of the country.

She managed to jump bail after a surety who stood in for her failed to produce her at the court. Indicating that he did not know the whereabouts of the woman.

The surety, Mohammed Bondirgbum, who is a freelance journalist has now been granted a GH₵3,000 bail of his own after he failed to produce the Chinese woman he claims he knows next to nothing about.

The Ministry of Lands and Natural Resources in March directed the Forestry Commission to ban the harvesting of Rosewood in the country earlier this year.