Making the UN relevant to all people: The role of national parliaments 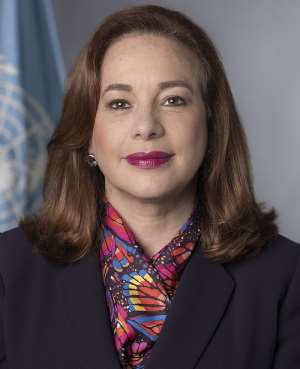 Former UN Secretary-General Kofi Annan, one of Ghana’s greatest gifts to the world, used to say he was a “stubborn optimist”. Today, us optimists must be very stubborn indeed.

Earlier this week, the UN’s Global Assessment report – a compilation of over 15,000 academic studies by some 400 experts from 50 countries, as well as reports from indigenous communities – warned that nearly one million species are at risk of extinction. Coral reefs are dying. Rainforests are drying into savannahs. The ecosystems on which we depend are deteriorating rapidly. And we are to blame.

Humans have significantly altered a staggering three-quarters of all land and two-thirds of our marine environment. One third of land is now used for crop and livestock production. The same goes for nearly 75% of our freshwater resources. Plastic pollution has increased ten-fold since 1980, contributing to more than 400 ocean ‘dead zones’.

Alas, this is not the only challenge we must overcome. We have just over a decade to avoid the worst impacts of climate change – carbon emissions must peak next year. We must address longstanding sores, such as poverty, human rights abuses and gender inequality. We must tackle newer problems, including extremism and cyber security. We must ensure that changes in technology and demography yield benefits, and mitigate consequences like unemployment.

The international community’s to-do list grows and grows. And to top it off, just when the world is crying out for greater cooperation – the only way to address this raft of challenges – the value of multilateralism is being questioned. Many governments are turning inwards, reluctant to invest in global solutions. Many people are losing faith the ability of their leaders to keep them safe and improve their lives.

Populism and extremism are on the rise. Justified concerns about unchecked globalization have mutated into a backlash against the very principles that give power to the people, from human rights to social justice. These trends are present in every region.

So why do I remain an optimist?

First, because for all its flaws, the international system has delivered substantial gains for the world. The United Nations supported the peaceful transition to independence of over 80 countries. Its peacekeepers – with strong representation from Ghana – have helped to protect civilians in some of the worst conflict zones. Its humanitarian agencies have provided essential services to millions of people. Its development programmes have boosted literacy and reduced the impact of deadly diseases.

It has helped states to adopt laws and standards on almost every aspect of human life. Indeed, the very concept of an international community would be meaningless without the UN – in particular the General Assembly, the world’s most democratic and representative forum, where all 193 Member States come together to solve global problems.

Second, despite challenging global political environment, multilateralism is alive and kicking. I see it every day in the corridors of the UN. I see it when I visit countries like Ghana. The overwhelming majority of world leaders understand that multilateralism strengthens national sovereignty, by enabling states to pursue their interests and manage their problems collectively – sharing the burden, costs and risks.

And third, because we have – through the 2030 Agenda for Sustainable Development – our survival kit for humanity.

What we need now is action on two fronts: greater solidarity from the international community, and a new governance contract that makes the people close partners for the implementation of the global commitments needed to secure our present and future.

As the President of the United Nations General Assembly, the “Parliament of Humanity”, I am engaged with world leaders on how to build effective support among people in all Member States of the UN for the implementation of the commitments leaders make at the United Nations. After all, the hard choices we must make to secure our lives, livelihoods and our future fall heavily on ordinary people and their families. National parliaments must play a critical role in building public support for the implementation of global commitments made at the United Nations.

I have launched a process in our global parliament, the General Assembly, to make the UN relevant to all people and to bring the UN closer to the people, including changing the way the General Assembly does its business and through revamping the media and communication operation of the Office of the President of the General Assembly. National parliaments can also use their power to organize public hearings, parliamentary question time and other devices for public interaction with the Executive and engagement with civil society in innovative ways, to forge national consensus for national positions, before and after multilateral negotiations, to ensure public support during implementation.

I am convinced that unless we quickly find more effective ways of building support among the people for the commitments leaders make at the United Nations, we shall continue to fall short of the bold actions required to address the difficult, in some cases existential, challenges facing our world, including climate change, rising inequality, unemployment, especially among young people, and the implications of the changing nature of work for social protection, violence against women and terrorism.

Let’s unlock the complicated political environments in which Governments seek to make radical changes in response to a world in stress in order to ensure our individual well-being and safeguard our planet. That way we renew our multilateral system, which is the only guarantee for an interdependent world with shared values that works for all, and our societies.

"You Were Not A Vice President When MoMo Was Introduced 11ye...
20 minutes ago