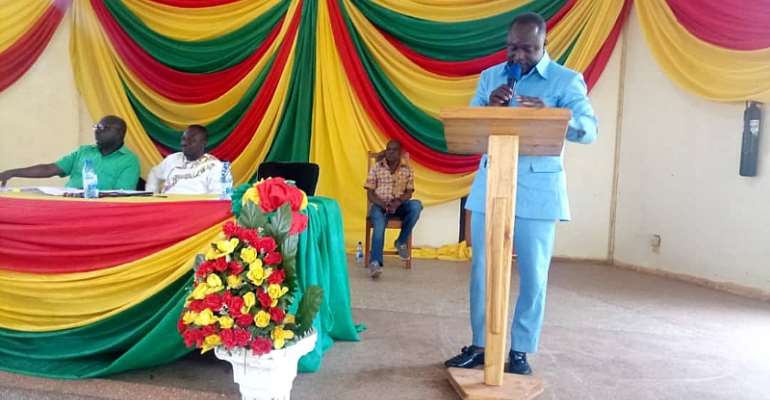 To achieve sanitation targets, Community Lead Total Sanitation (CLTS) concept were monitored closely in eight (8) selected communities in the Municipality, community members were taken through series of good hygiene practices to ensure total sanitation, the intervention led to the construction of one hundred and six households’ latrines in those communities

The Municipal Chief executive Hon. John Kofi Donyina disclosed this at the First General Assembly Meeting of the Techiman Municipal Assembly for 2019 at Bonokyempem hall.

At the meeting, he asks Assembly members to join him thank the hardworking staff of the Assembly for their efforts exhibited during the 2016 District performance Assessment Tool (DPAT) that made the Assembly qualify for the support.

Under school feeding programme, Hon Donyina said currently there are 47 beneficiary schools in the Municipality and 17,312 pupils benefit under the program.

He stresses that education is the bedrock of every nation and if Techiman is to be developed moving forward, issue of education should be addressed thoroughly.

He explained that 70% of the common Fund allocation of the Assembly over the years goes into provision of educational infrastructure. But stress that looking at the size of the municipality this represents only 35% to 40% of the Assembly’s requirement.

Touching on Sanitation, Hon. Assembly members called on Government to abrogate the contract of ‘’Zoomlion’’ or minimize its Monopolistic power by decentralizing waste Management operations to the Regions to improve on the sanitation challenges in the Country.

According to them “Zoomlion” is taking huge sums of monies mandatorily from the MMDAs at source, but are not living up to expectations in terms of refuse collection and Management at the various metropolitan, Municipal and District Assemblies Nationwide.

Commenting on the National Health Insurance Scheme (NHIS) performance in the Municipality, Hon. John Kofi Donyina said the introduction of the Mobile renewal policy has brought the scheme some relief and also improve on the delay in membership renewals.

He however, said mobile renewal constituted 22,811 representing 75% whiles’ office renewals out of total 7,640 represents 25%. 4,897 was recorded without payment due to government intervention such as pregnant women registration, Community Indigents, school feeding programme as well as LEAP beneficiaries.

Planting for export and rural development (PERD), the municipal chief executive explained that 250,000 cashew seedlings are to be distributed this year to 7,000 farmers and urge Assemblymen to take advantage of the project to support their communities.

He added that the project had so far employed one hundred and forty (140) youth to support farmers in the area of education, new farming technology and seedlings production, the Assembly had invested an amount of GH₵ 84,872.00 in the project.