Malaria As A Major Killer Diseaes 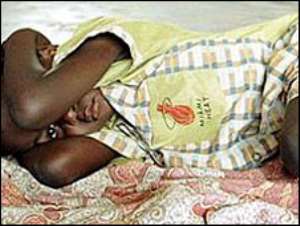 Malaria kills around 800,000 people a year and is second only to tuberculosis in its impact on world health.

The parasitic disease is present in 90 countries and infects one in 10 of the world's population - mainly people living in Africa, India, Brazil, Sri Lanka, Vietnam, Colombia and the Solomon Islands. There are four main types of malaria, all spread via mosquitoes.

Ninety per cent of all malaria cases are in sub-Saharan Africa where it is the main cause of death and a major threat to child health. Worldwide, a child dies of malaria every 30 seconds. Pregnant women are also particularly vulnerable to the disease, which is curable if diagnosed early.

The economic impact of the disease is immense, causing many lost days of work and loss of tourism and investment.

Around 2,000 people a year in Ghana get the infection and it kills many.

But it is preventable and curable.
What are the symptoms?
Most people survive a bout of malaria after a 10-20 day illness, but it is important to spot the symptoms early. The first symptoms include a headache, aching muscles and weakness or a lack of energy. This means it can be confused for other conditions like exhaustion or flu.

The classic sign of the infection is a high fever, followed a few hours later by chills. Two to four days later, this cycle is repeated.

Symptoms can appear any time from six days after being bitten by a mosquito carrying the malaria parasite. The time it takes symptoms to appear - the incubation period - can vary with the type of parasite that the mosquito was carrying.

The type of parasite will also determine whether the disease will be mild or severe.

Anyone can catch malaria and even the young and fit can die from a serious infection.

The most serious forms of the disease can affect the kidneys and brain and can cause anaemia, coma and death.

How many cases of malaria are there?
According to the latest progress report from the World Health Organization (WHO), malaria killed 781,000 people in 2009, and there were 225 million cases.

Seven countries are now free of malaria, said the WHO.

Efforts to eradicate malaria was first attempted on a large scale from 1955 to 1972.

During that time 20 countries were declared free of malaria by the WHO.

However, there was a resurgence of malaria in the 80s and 90s, and the number dropped to only four countries.

How can malaria be contained?
A great deal has been spent on malaria research. The main thrust of study is towards developing a cheap vaccine.

None has yet been developed which is approved for general use.

The spread of the disease can be reduced by cutting down the mosquito population, for example by filling ditches where mosquitoes breed.

Early diagnosis can lead to successful treatment so education in spotting the symptoms of malaria is important. The spread of the disease can also be tracked and preparations made.

Bednets coated in insecticide have also reduced the incidence of the disease by up to 35%, according to the World Health Organization.My take on malaria as a major killer disease which need much attention in my country Ghana.