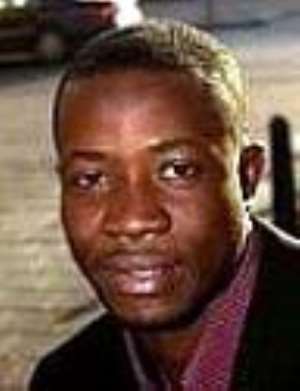 Whilst the Enquirer was on its long break, a pretty police female detective was lurking around the empty office looking for Raymond Archer. When she finally found him, she had a simple message “sir, the crime officer at Tesano Police Station wants to see you.” Mr Archer said he thought he was going to get a big New Year scoop from the police. It turned out to be a really interesting scoop indeed!

A story Mr Raymond Archer was expecting to be published in a newspaper owned by a Deputy Minister of State since September 2005 was now beginning to unfold.

The police said they are investigating a case of stealing in which Mr Archer is involved. The case has to do with a claim that Mr Archer might have stolen ¢2.4m or ¢2.1m or probably ¢1.8 in the year 2003.

Stealing in Ghana is a criminal offence which contravenes the Criminal Code. The complaint was filed by a certain Nana Prempeh on December 21, 2005, a man who had earlier spoken to two media houses to say that some officials of the ruling New Patriotic Party (NPP) were trying to “use “him to destroy Mr Archer.

Nana Prempeh repeated this claim of politicians seeking the wholesale destruction of Archer's integrity during a conversation with him on December 25, 2005, four days after he made the complaint of stealing to the police.

Nana Prempeh's statement to the Police was that Mr Archer boarded a taxi in the year 2003, and found that a passenger had left ¢2.8m in the taxi. That Mr Archer contrary to his promise of making a radio announcement for the owner of the money to come for it failed to do so and instead pocketed the money and gave ¢400,000 to the driver to “shut up”. Mr Archer has since given a statement to the police and is on a ¢2m self recognizance bail. Raymond Archer Tells Story In Mr Archer's statement to the Police, he stated that some years back, whilst he was working at the Chronicle, his care developed a fault one night whilst on his way home, so he boarded a taxi from Accra New-Town to Dansoman.

According to Archer, when he boarded the taxi, he found money on the back seat (He cannot immediately remember the figure but he thinks its either ¢2.5 or 2.8m). Mr Archer said he immediately drew the attention of the driver that a passenger forgot his money in the taxi and asked if the driver could locate the place he dropped the last passenger.

The Driver whom Mr Archer later came to know as one Bright Okyere, said he picked the said passenger by the roadside and dropped him by the roadside so it was impossible to locate the passenger.

Okyere is a car mechanic who drives a night taxi owned by Nana Prempeh, the complainant. Mr Archer said in his statement to the police that even though he usually does not take taxi drivers to his house, he took Okyere to his house and gave him his mobile and office numbers and told him that they should cause a radio announcement to be made for the owner of the money to come for it.

The Enquirer Editor-In-Chief said that the following day, Okyere called him and so he picked Okyere to know Archer's office (The Chronicle) so that he could be checking if the owner of the money had been found. Mr Archer recollected that the next day, an Accra based radio station wanted to interview him on a story he had done in the Chronicle on their morning show, so he sought permission to make the announcement on the station. He told the police that he recollects the announcement was later translated in Akan. Mr Archer also said because Okyere is not educated, he Archer made telephone contact with a man who identified himself on the phone as the owner of the taxi and asked that he witnessed that the money be sent to the police.

The Enquirer publisher said, Nana Prempeh who is also the complainant told Archer that he was traveling to the Netherlands and that when he returns the three: Archer, Okyere and he Nana Prempeh would go and hand over the money to the police. Soon after Nana Prempeh left, Okyere, who had then become a friend of Archer and was given the responsibility to repair Archer's care kept coming to the office of the Chronicle asking that he wanted his share of the money.

When Mr Archer told him that the money should be handed over to the police, Okyere said the police would spend the money. Okyere later came to plead with Archer that he needed to solve an urgent problem so Archer should give him part of the money. Mr Archer said he reminded Okyere that he needed to return the money, so that it can be handed over to the police when Prempeh returns. He also reminded Okyere that irrespective of whether he has money or not, if the owner emerges before he Okyere is able to raise the money, he would be expected to return it. This he said Okyere agreed.

Mr Archer narrated to the Tesano police that he never set eyes on Okyere again and has still not seen him at the time of writing his statement. Mr Archer said he also left for the US for studies. He continued that, he did not also hear from Nana Prempeh until November 2005 when Nana Prempeh started contacting media houses that some politicians were forcing him to use the story against Archer because his taxi driver had told a passenger in a conversation about the matter.

Nana Prempeh told Mr Archer on December 25, 2005 that unknown to Okyere, the passenger he was conversing with was either an NPP man or had a brother who is a member of the current government.