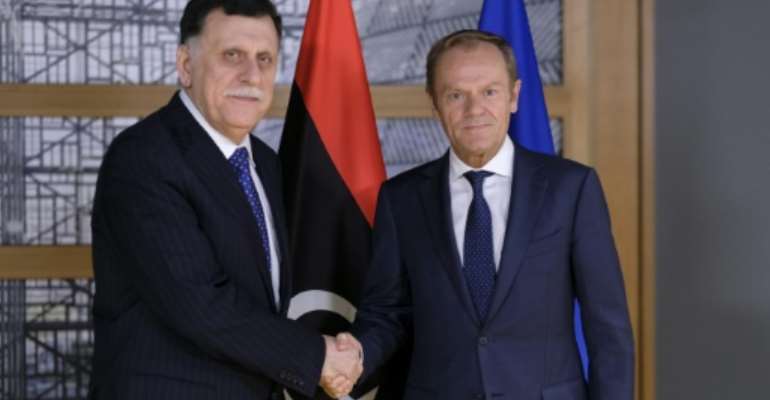 President of the European Council, Donald Tusk (R) welcomes Libyan Prime Minister Fayez al-Sarraj prior to a meeting in Brussels on May 13, 2019. Libyan strongman Khalifa Haftar's offensive against Tripoli represents a threat to international peace, the EU warned. By OLIVIER HOSLET (POOL/AFP)

The bloc called for all sides in the Libyan conflict to put down their arms and to commit to UN talks, though the month-long assault on the capital shows little sign of ending.

EU foreign ministers had earlier held talks on the crisis, which deepened dramatically last month when Haftar, whose Libyan National Army (LNA) holds the east of the country, launched a bid to seize Tripoli, seat of the UN-recognised government.

"The LNA military attack on Tripoli and the subsequent escalation in and around the capital constitutes a threat to international peace and security and further threatens the stability of Libya," EU members said in a statement.

"Furthermore, it enhances the risk of increased terrorist threat across the country."

The statement, issued after EU ministers met the UN-recognised prime minister, Fayez al-Sarraj, also voiced concern about the "impact on migration flows" the fighting was having.

Libya, which has been wracked by chaos since the 2011 uprising that killed veteran dictator Moamer Kadhafi, has long been a major transit route for migrants desperate to reach Europe.

Around 60 migrants died on the weekend when their boat capsized in the Mediterranean after leaving Libya for Italy.