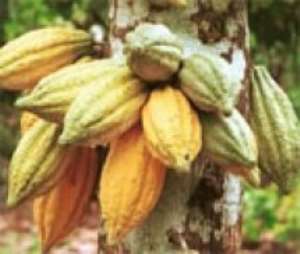 The National President of Ghana Cocoa Farmers Association, Mr. Anane Boateng, has warned that Ghana government risk meeting the one million metric tons of cocoa production target in 2018/19 if the right measures are not put in place to entice the cocoa farmers to remain in the sector.

He said successive governments have failed the sector miserably due to lack of innovations that seeks to improve the lives of cocoa farmers, have been relegated to the background, like a failure of COCOBOD to allow them to benefit from the Social Security and National Insurance Trust (SSNIT) and National Health Insurance Scheme (NHIS).

The Ghana Cocoa Board (COCBOD) early this year announced that the country has the potential of producing one million metric tons of cocoa this year due to policies implemented aimed at protecting cocoa seeds from diseases, making cocoa beans heavy and increasing cocoa yields.

But speaking to Captain Koda, the host of Otec FM’s morning shows ‘Nyansapo’ on Monday, May 13, 2019, he opined that most farmers are losing interest in cocoa farming by cutting down the cocoa trees to enter into other fast profit-making ventures to improve their welfare.

“I do not see Ghana meeting the one million ton cocoa production in the next two to three years. I rather see a reduction, because the government is not doing anything to help the industry. More cocoa trees are being cut down, poor motivation to cocoa farmers while the proceeds from the cocoa production are used to fund the needs of COCOBOD staff, instead of us (farmers),” he said.

He added that” the policymakers always tell us that the country could increase the profits from the cocoa sector by 200 percent but why are we delaying? We need to take the decision now so that we would not rely on the international market to determine our cocoa prices.”

Expatiating on how the country could have value for money from the cocoa production and pay the realistic cocoa prices to farmers, Mr. Boateng urged the government to devise means to ensure that the cocoa beans are not imported in its raw state.