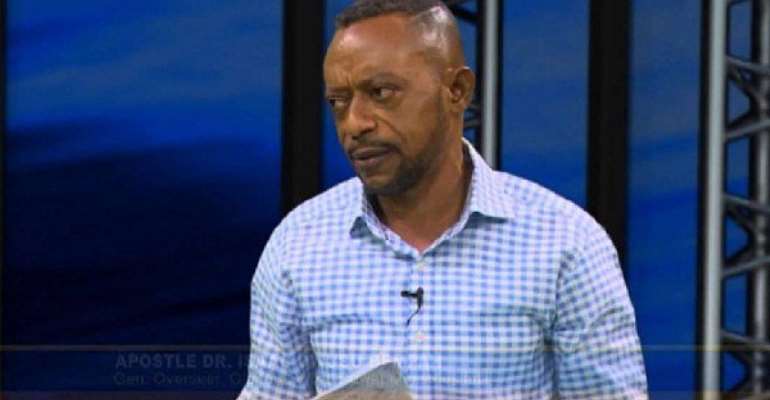 Multimedia’s broadcast journalist, Nana Adjei Obrempong has questioned the Criminal Investigations Department (CID) of the Ghana Police Service as to why the Founder and Leader of Glorious Word Power Ministry International - Rev. Dr. Prophet Isaac Owusu Bempah has never been invited for questioning over some wild allegations and comments he made.

The New Anchor who mostly broadcast from the studios of Adom Fm is of strong opinion that Owusu Bempah has a deep relationship with governing New Patriotic Party (NPP) therefore he has become untouchable even though he keep making some controversial statements which bother on security.

To buttress his claim he cited Owusu Bempah’s recent statement claiming to know the whereabouts of the Kidnapped Takoradi girls. The Multimedia Group Ltd journalist indicated that “this is purely discriminatory on the part of the CID and that a nation that is governed with dishonesty and hypocrisy will not prosper because God hates injustice”

He said he is surprised to see CID boss chasing NDC National Chairman Mr Samuel Ofosu-Ampofo whereas the Man of God is allowed to make wild statements and walk freely.

Below is his full statement;

WHY IS PROPHET ISAAC OWUSU BEMPAH WALKING FREELY IN TOWN WITHOUT POLICE INVITATION?

THE HYPOCRISY AND DISHONESTY OF THE POWERS THAT BE!

I sincerely think and feel extremely bitter for being a Ghanaian especially in the dispensation where a pro-NPP prophet could come out to tell Ghanaians that he knows the whereabouts of kidnapped girls whose parents are dying because of the pain but is left to walk about freely without even just police invitation.

I am unable to understand why Prophet Isaac Owusu Bempah after categorically stating on live radio that he knows where the children are and that only president Akufo Addo can force him to show where these children are being kept.

As if it was not enough, the pro-NPP prophet went ahead to state that he knows a police officer who can lead us to know the whereabouts of the missing girls but will not want to mention his (Police Officer) name until the president instructs him.

Ironically, the police CID has been inviting the National Chairman Of the NDC severally in connection with these same missing girls and fire outbreaks in the country after an alleged suspect mentioning the chairman’s name to a link with the missing girls.

This is not a democracy, this is a disgrace to the world democracy and Ghana politics because true democracy believes in equality, fairness, justice and without discrimination in the enforcement of the law and justice.

Why should Ofosu Ampofo be invited by the Police CID for investigations because of his leaked tape and alleged mentioning of his name by a suspect but will allow prophet Isaac Owusu Bempah to go untouched?

Do the constitution and the criminal laws of Ghana now see some citizens as special and untouchable than others? Is it not our respectable constitution that states clearly that there shall be no discrimination based gender, religion, color, political affiliations or association and in fact ABSOLUTELY ANYTHING?

It is undemocratic to treat other citizens with kids groves but treats others with thunderous groves and iron hands like they are doing now to Prophet Owusu Bempah.

A nation that is ruled with hypocrisy and dishonesty will never develop and prosper because God hates injustice.

Injustice is is oppression and bondage therefore anytime a nation walks on the path of injustice, they attract the curse of God.

Isaiah 1:17, Isaiah 58:6, Psalm 82:3, James Chapter 2 speaks clearly that God hates partiality and that the punishment of God will visit people who treat other unjustly like what is going on today in Ghana.

The Ghana Police Service I know and trust are professionals so I want to believe they will do as such and retrieve the audio of Prophet Isaac Owusu Bempah to start investigating process so that the trust we (citizens) have in them with remains unshaken.

Again my gross disappointment is with the media in the country because they seem not to have any interest in this alarming comments by the pro-NPP prophet and those who will treat it also treat it without any seriousness pity for the parents of the kidnapped girls.

The media is speedily losing its role as the four estates of the real who are suppose to keep the gate. The media has now become a flood gate for injustice and corruption to survive.

I believe that if Mr. Ofosu Ampofo has been invited for investigation then Prophet Isaac Owusu Bempah must be invited as well for his comments.

Ghana believes in democracy and the rule of law.