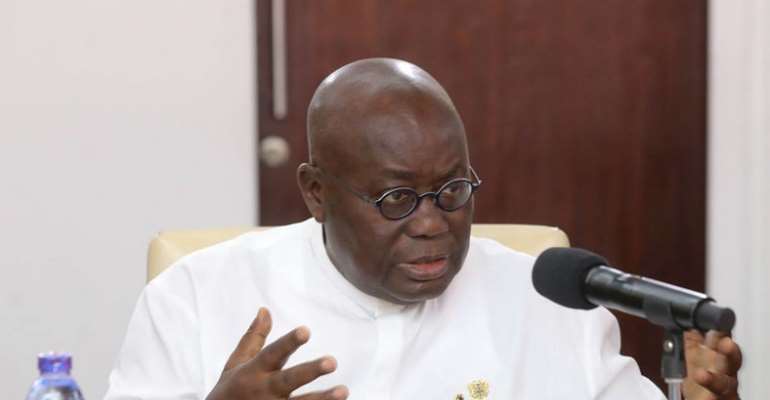 Since when has His Excellency the President, Nana Addo Dankwa Akufo-Addo, cultivated the habit of cringing at criticisms hence subsequently, gradually getting emboldened to detest his critics with tyranny that frightens, and puts, them, to flight? I will be shocked to learn that in reality, the humble liberator I knew, therefore, proudly seeing him as the reincarnated biblical Moses or David, has in a short space of time, thus his ascendency to the Ghana presidency, become a tyrant with aversion to criticism.

One Kevin Taylor, a newscaster of a programme supposedly called "Friday Editorials" has asserted amid heaping of insults on the person of His Excellency Nana Addo Dankwa Akufo-Addo that he has become a tyrant with unqualified hatred for criticisms. When this write-up gets published and I happen to be posting them to my WhatsApp contacts, I shall attach the castigating-recorded newscast by Kevin Taylor to it.

He claims the President has become a curse to the nation; a tyrant who has empowered the CID Boss Tiwaah Addo Danquah to chase and intimidate his political opponents. He chased out of the country some journalists who criticise him, killed some journalists who criticised him and used State institutions like the National Communications Authority (NCA) to close down some media houses that are critical of his personality and policies.

For the attention of the President, let me please emphasise to you the importance of criticisms if indeed they are constructive. It was said by Benjamin Franklin that "Critics are our friends, they show us our faults." Benjamin Franklin, born on January 6, 1705 and died on April 17, 1790, was "an American polymath (having learned much) and one of the Founding Fathers of the United States. Franklin was a leading author, printer, political theorist, politician, freemason, postmaster, scientist, inventor, humourist, civic activist, statesman, and diplomat". Therefore, criticisms, whether they are constructive or destructive, must be accommodated. However, constructive criticisms make a better difference and achieve positive results than destructive ones. And, as some words are more harmful than the sword and can kill, people must put themselves in the stead of those that they love to criticise destructively, as seen to be done by Kevin Taylor in the said newscast.

Kevin claims on authority with raised voice, arrogance and pride that His Excellency Nana Addo Dankwa Akufo-Addo has used some State institutions to kill some journalists and/or chased some out of the country. Can he provide evidence to implicate the President in the murder of any journalist? Who are the journalists that he has murdered or chased out of the country? Does Kevin Taylor know that he is making serious allegations for which he can be arrested or invited by the police to help them conduct successful investigations leading to the prosecution and conviction of the said perpetrators including the President himself? Does he know that if his allegations turn out to be false, he can be sued by the President for defamation of character and when such a line of action is taken, he should not see it as the President oppressing journalists or his political opponents?

If the President were a tyrant as audaciously, maliciously asserted by Kevin with impunity, Kevin should have by now been invited by the police or the BNI to assist them with provision of evidence into their investigations of the alleged murder of the journalist or journalists in which the President is implicated. Why can’t Kevin lodge a formal complaint with the police or any international body that the President being a tyrant has killed this or that journalist to unmask him as a despot cloaked in fake democracy apparel?

I actually hate people who make sweeping disparaging statements about others just for the attainment of their self interests. It is very silly on the part of Kevin to sit in his studio to broadcast to the nation that the President has killed a journalist and chased some out of the country without bothering to lodge any official complaint with any institution within or outside Ghana against the President and his agents and assigns.

Yes, people may see me as critical of Asantehene Otumfuo Osei Tutu II for his abuses of power and obstinate involvement in the ongoing Kumawu chieftaincy dispute. I do have the facts and credible evidential documents to support my assertions. I sometimes even publish true copies of my evidential documents for the public scrutiny. Does Kevin have any evidence, especially about the President killing or ordering some State institutions to kill journalists who oppose him or his policies?

Why are some media houses shut down under the presidency of His Excellency Nana Addo Dankwa Akufo-Addo as claimed by Kevin? If such media houses are shut down illegally for just critiquing the President constructively or destructively, why can’t they take him or the agency enforcing the closure of the media house to court? Yes, the Ghana Constitution, erroneous as some of its sections may be, says that a sitting President in the execution of his duties cannot be taken to court. Nevertheless, it is not when the President is committing crimes against the State or ordering the killing of journalists where credible evidence can be adduced.

Asking the President to forget about his promises made to Ghanaians as he will never be able to achieve them is the display of the highest order of stupidity by Kevin. Does he expect him to realise all his electioneering promises in two years in office? Does Ghana have a mint to print money, or resort to Quantitative Easing where the Central Bank will increase the money supply in the system, to practically permit the President execute all the promises he made? The promises are to be seen in the lenses of long term development plan for Ghana by an incorruptible visionary leader.

I am persuaded Kevin Taylor has an agenda to bring down the President and his ruling party but he has failed by shooting himself in the foot by his lies. Should he fail to mention the journalists the President has killed or fail to tell the reasons why some media houses have been shut down, as alleged tyrant as the President is, then I shall advise him to shut the fuck up. He is throwing dust into our eyes but he will fail in whatever agenda he has embarked on.

If he has been lucky to be in the position to broadcast to the nation and the world, he must use it sensibly to help his nation and people. He should not use it to perpetrate lies in pursuance of his hidden selfish agenda.

I shall be back to counter any further rubbish he spews out in the public domain. Should he tell the truth, I shall support him 100%. If the President and his appointees are embezzling funds and State assets or indulged in any malpractices, let him bring them up and I shall be supportive of him to squeeze their balls until they squeal like pigs.

Since politics is driven more by perception than facts, NPP must be careful by the diabolic agenda Kevin is pursuing. They must start doing the right things through implementation of counter but truthful strategies.

Let me round off by asking the public readers to listen to the following song by Adomako Nyameke titled, "Kanea Maye" as in the web link below. Kevin should tell exactly what the President has done without any exaggerations or lies with intent to bring him down while enhancing his own opportunistic aims.

The author has 1994 publications published on Modern Ghana.