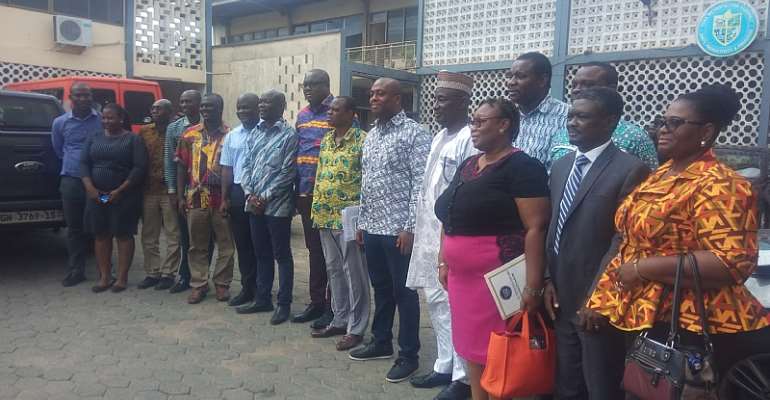 The Member of Parliament for Odododiodio Mr Edwin Nii Lantey Vanderpuye has chastised the heads of Metropolitan, Municipal and District Assemblies for not doing enough as compared counterparts in rural centres towards the effort to mobilize People With Disabilities (PWDs) for registration.

Hon Vanderpuye made this known to the media after the Parliament Committee on Local government and Rural Development met the Tema Metropolitan Assembly officials during the routine exercise.

"The rural Assemblies are rather doing more as compare to those in the Urban Centres as this Committee traveled across this country. As we went through the country we saw the efforts made by the Districts in Brong Ahafo, Northern and Ashanti regions how Districts Assemblies officials embarked on PWDs mobilisation to hamlets and villages for the purpose of registering them," he stated.

He continued, "We saw an effective collaboration between the Officers and the Assembly members mobilizing the PWDs from their electoral areas for registration".

Hon. Vanderpuye added that "Unfortunately we are not seeing the perfect match in the Urban areas, we think that the officers in Greater Accra should do more to register the PWDs in the region because you can't tell me that there are more People With Disabilities in a place like Banda District than TMA."

The lawmaker stressed that "As a Committee, we are trying to work with the District Assemblies Common Fund (DACF) to make a recommendation to them to vary the formula for the disbursement of the Disability Fund.

"We don't think it is right for the Funds to be shared equally amongst the Assemblies for instance if we have more disabilities persons in a place such as Sene District the Assembly should receive the same Disability Fund as AMA with lesser Disabilities."

Member of the Committee Mr Thomas Nyarko Ampem charged the TMA focal person to formulate a programme that could enable her gather and register more PWDs in the Metropolitan.

"We expect you to organise a programme which could enable you visit the various communities to register the PWDs within the Metropolis otherwise you will be sitting in the comfort of your zone thinking that the three hundred and fifty figures are the exact total number of PWDs in the Metropolitan, " he observed.

The Parliament Committee also probed into the number of times the TMA undertake the fumigation exercise of institutions in the Metropolis.

It was also discovered that TMA had privatized all the 40 public toilets in the Metropolis.