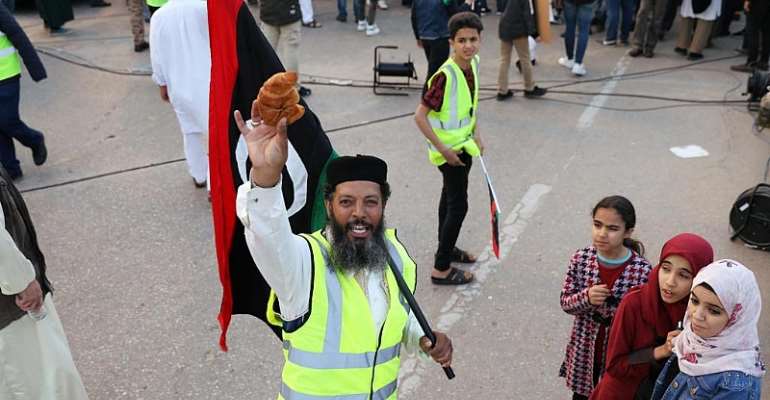 The foreign minister of Libya's eastern parliament mounted a diplomatic offensive against the country's Prime Minister Fayez al-Sarraj Thursday, backing his rival Khalifa Haftar over last month's assault on Tripoli. It comes as a blow to Sarraj who has been touring Europe this week to “gather support against the aggression.”

"This operation was to free the people of Tripoli," Abdhulhadi Ibrahim Lahweej, the foreign minister of Libya's eastern parliament told RFI.

"The people of Tripoli are now under the control of militias. It has been that way for eight years," he said.

Despite protests from Libyans against the offensive of Haftar's self-styled Libyan National Army (LNA) on 4 April, Lahweej insisted the operation had the full backing of the majority of the population.

"This is not a personality operation. All the people want that: the parliament, the government, non-governmental organisations. All Libyans want (...) peace. After eight years, you don't need terrorism," said Lahweej, who was appointed to his position following Libya's parliamentary elections in 2014.

Haftar, whose power base is in the east of the country, says he is trying to oust the militias that dominate the UN-recognised government led by Prime Minister Fayez al-Sarraj in Tripoli.

"He is not seeking to overtake the whole of Libya," comments Lahweej. "Once the Tripoli operation is finished, he will return to the negotiating table."

Haftar's critics are not so sure. They claim he is bent on a violent coup and will install a military dictatorship if successful.

The 75-year-old and former general in Gaddafi's army, has so far seized towns and a big oilfield with little bloodshed, and according to US President Donald Trump, has played a significant role "in fighting terrorism and securing Libya's oil resources.”

"We are in a very awkward position where Haftar is just a military general who did a coup, who is legitimized by the fact that he is the most efficient to fight against Daesh [Islamic State]," explains Emmanuel Dupuy, president of the Institute for European Prospective and Security (IPSE) in Paris. "But that does not give him any legitimacy," he told RFI.

That point was underscored on Wednesday when France reiterated its support for Prime Minister Fayez al-Sarraj and called for an unconditional ceasefire to end hostilities between the two factions.

"The government of France is supporting all the Libyan people," insists Lahweej, referring to Paris's at times ambiguous support of Haftar, who is seen as a stabilising force in a country rocked by years of conflict.

The recent fighting has already displaced 55,000 people and left more than 430 dead.

"War is not the right way of course," admits foreign minister Lahweej. "No one needs war, or blood. But how can you work and dialogue with terrorism?" he says, using a reference eastern officials often make to describe forces allied to the Tripoli government, which relies on support from several armed groups.

Some of these armed groups have been linked to the Muslim Brotherhood, whom Donald Trump wants to designate as a terrorist organization.

"Sarraj himself is not Muslim Brotherhood so to speak but he does allow Muslim Brotherhood backed forces to join his coalition and that is deeply problematic," comments Mitchell Belfer, president of the Euro-Gulf Information Centre in Rome.

These militias, mainly from the port city of Misrata, have vowed to block Haftar's Libyan National Army. One contingent has deployed to reinforce Tripoli, creating a stalemate between Sarraj and Haftar's forces.

"Eventually this war has to come to an end," continues Belfer. This means, "not allowing the militias based on tribes to be strong in particular parts of the country. The country needs to be unified," he told RFI.

War not against Sarraj

"If we are not willing to allow the stronger actors to unify the country then perhaps we should get used to the idea of a dissolved Libya in the international discourse," Belfer said.

The UN Security Council held an emergency meeting Thursday behind closed doors to discuss the humanitarian crisis. The world body has so far been divided over how to respond to Haftar's assault, forcing Britain to put on hold a draft resolution demanding a ceasefire.

For now, peace looks unlikely. Sarraj told RFI that "Haftar's decision to attack Tripoli… has put an end to any hope of reaching a political agreement.”

Yet foreign minister Lahweej argues the fighting is "not between Haftar and Sarraj."

"The war is between all Libyans against terrorism, against militias, against Islamist groups. The war is to free Tripoli from the Muslim Brotherhood," he said.