By Valerie Leroux and Joseph Schmid 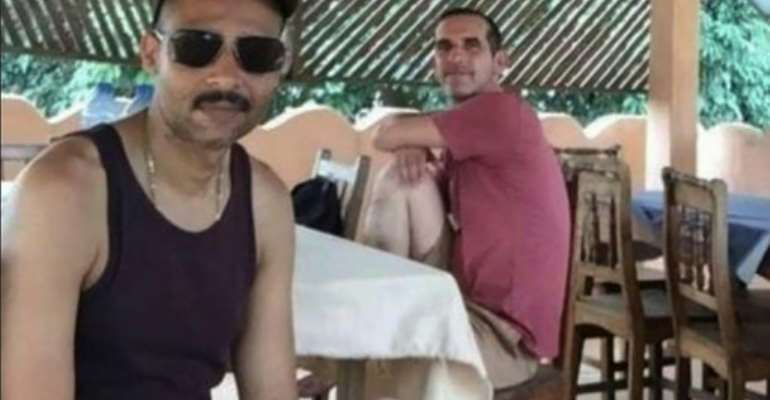 Laurent Lassimouillas, left, and Patrick Picque were freed by French special forces in Burkin Faso after being kidnapped in neighbouring Benin. By STR (AFP)

The two French tourists rescued from their kidnappers in Burkina Faso this week were seized in an area of Benin that France has long advised travellers to avoid, Foreign Minister Jean-Yves Le Drian said Saturday.

"The zone where our two citizens were has for some time now been considered a red zone, which means it's a zone where you shouldn't go, where you're taking significant risks if you do go," Le Drian told Europe 1 radio.

The foreign ministry's travel advisory website lists the areas of northern Benin near the border with Burkina Faso as "Formally Discouraged," including Pendjari National Park.

It warns of "the presence of armed terrorist groups and the risk of kidnapping."

The French tourists, Patrick Picque, 51, and Laurent Lassimouillas, 46, disappeared during a tour of Pendjari on May 1.

The disfigured body of their guide was found shortly after they were reported missing, along with their abandoned Toyota truck.

Intelligence agencies tracked their captors across the semi-desert terrain of eastern Burkina Faso, where it appeared they would soon cross the border into Mali.

Officials feared the hostages would be handed over to the Macina Liberation Front (FLM), a jihadist group formed in 2015 that is aligned with Al-Qaeda in the region.

French President Emmanuel Macron gave the order for the nighttime raid Thursday on the militants' camp, in which Picque and Lassimouillas were freed, along with an American woman and a South Korean woman.

The French commandos were unaware of the presence of the two other hostages, officials said.

Four of the six kidnappers were killed, but two French soldiers also died in the raid.

Picque and Lassimouillas, along with the South Korean hostage who has not yet been identified, arrived in Ouagadougou on Saturday, where they were to meet with Burkina's President Roch Marc Christian Kabore, according to an AFP reporter at the presidential palace.

"Our thoughts go out to the families of the soldiers, and to the soldiers who lost their lives in freeing us from this hell," Lassimouillas said in a brief statement.

He and Picque are to return to Paris later Saturday, where Macron and Le Drian are to meet them at the Villacoublay military airport southwest of the capital.

Although Benin has long been spared the unrest seen in Mali and Burkina Faso, French officials have warned that jihadist insurgents could extend their operations into the sparsely populated desert regions further south.

"The threat is evolving and has become much more mobile, and now countries to the south of Mali have become targets," Le Drian said Saturday. 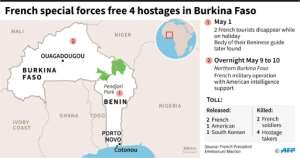 "The greatest precautions must be taken in these regions to avoid these types of kidnappings, and avoid the sacrifices required by our soldiers," he said.

The raid on the kidnappers was led by the elite Hubert commando unit of the French naval special forces, which was deployed to the Sahel at the end of March.

They were assisted by Burkina and Benin authorities and by the United States, which provided intelligence and support.

A total of 24 French soldiers have died in the region since 2013 when France intervened to drive back jihadist groups who had taken control of northern Mali.