Fall Out From GAF: Over 700 'NPP Backdoor' Military Recruits Stranded 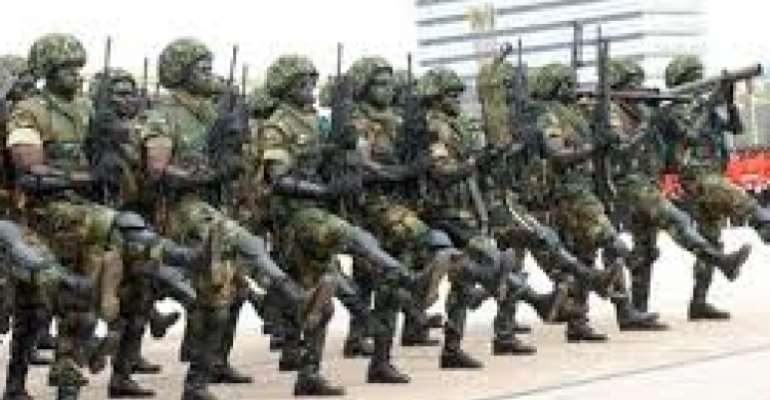 some military officers at national parade

Some over 700 people recruited into the Ghana Armed Forces (GAF) are reportedly stranded in a bizarre suspicious waiting list whose shortlisting remained shocking to recruiting officers in the army.

Sources closed to the Military, alleged that these questionable recruits hardly meet up with military recruitment standard and some are believed to be political party vigilante members and supporters being smuggled through into the ranks of the army without going through the regular recruitment process.

Our sources say the situation has left the Military in more traumatized than confusion as recruiting officers find themselves at their wits end about what to do with the unsolicited 700 macho men now in their hands.

Unconfirmed information pointed out that the recruits might have been smuggled on to the list by high powered persons within the ruling New Patriotic Party (NPP).

These recruits were apparently party boys who were roped on to the list in a move by the ruling party to create jobs for the boys.

For the purpose of inflating the Armed Forces with members of the disband vigilante boys, powerful elements within the current government administration are said to have planted one Col. Baidoo Acheampong at the recruitment office of the Military.

Unfortunately, Col. Acheampong and his hatchet job were soon discovered by the Military High Command which got him removed.

But his removal was short-lived, as NPP party bigwigs fought tooth and nail to get Col. Acheampong reinstated amidst threats by disappointed foot-soldiers.

This portal can confirm that it is on the heels of this that a waiting list of recruits has strangely been saddled with more than 700 recruits whose recruitment is shocking to Military recruiters.

Sources are putting the development down to the ruling NPP party who attempt to infiltrate an enlistment network managed by functional executives of the ruling party.

The cartel apparently smuggled the names of the stranded recruits on to the shortlist through their allies at the top of the military hierarchy even though they had not gone through due processes and medical check-ups to determine their fitness as is the case for new recruits into the army.

Currently, the National Peace Council is leading a mediation between the ruling NPP and the main opposition NDC, to disband Invisible forces, Delta forces and the Hawks respectively.

The case of political party boys being sneaked into the security agencies was highlighted in December 2018 when heavily armed and masked members of a so-called National Security Anti-Terrorism squad stormed an ongoing by-election and unleashed mayhem by shooting and injuring dozens of civilians with powerful assault rifles.