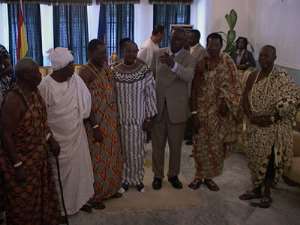 Accra, Jan. 10, GNA - Nii Ako Nortei IV, the Osu Manklalo (Overlord), on Tuesday asked government to give all bungalows and other properties on the Osu Mantse Layout European Residency back to the Osu Stool for proper re-allocation. He said that parcel of land was leased to the Colonial Masters between 1933 and 1939 for 50 years, which had elapsed in 1989 but no one had approached the stool for renewal or re-negotiation and their petition to both past and present governments fell on deaf ears. Nii Nortei IV said this at their annual media encounter to take stock of activities of the Osu Traditional Council and plan for the years ahead. He contended that if they re-claim those properties the Stool together with the King Makers would re-allocate them and use the funds to embark on developmental projects they deemed fit for the area. "Unlike other Ga lands, Osu lands are for the Stool and no individual or clan can lay claim to all lands in the area and for that matter it should not be difficult for the government to give them back their properties," he said. The Manklalo said they would no longer go to the government for negotiations but was quick to advise those occupying the bungalows to come and see the Stool for renewal of the leasehold or they would be compelled to eject them. "We want to inform all staying in these properties that they are squatters and the time will come that the council will put its feet down and eject them." The Osu Mantse Layout European Residency starts from the Togo Embassy area to the Ghana Trades Union Congress through Ghana Institute of Journalism, Ghana Bar Association area to the front of the Police Headquarters and to Danquah Circle. He said the Council had persistently petitioned the then Ministry of Works and Housing to even allocate a bungalow each to the council and the Wulomo (Chief Priest) to use as their offices but nothing was heard from the Minister till date. Meanwhile, Nii Nortei IV alleged that the Ministry and the Lands Commission continue to sell their lands and allocate the bungalows to people who do not pay any royalties to the Osu Traditional Council. Nii Nortei IV said, apart from other lands, the Council has the leasehold document, which proved that the agreement had expired in 1989 and "we are now awake and are prepared to fight this even outside Ghana until justice prevails." He, therefore, appealed to government to consider, including Chiefs in making decisions that affect their people and communities to ensure peace and unity.