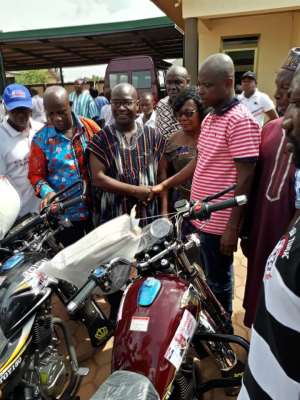 The Bono Regional Chairman of the ruling New Patriotic Party, Kwame Baffoe, has donated 24 motor-bikes for distribution to all the 12 NPP constituency offices in the region to kick-start the “Operation 12 seats agenda.”

In addition to the motor-bikes, Abronye DC, as he is popularly called gave Ghc 6,000.00 to each of the constituencies to facilitate their work on the ground.

Following his elevation to the position of the Bono Regional NPP Chairman, Mr. Kwame Baffoe announced plans to win all the 12 constituencies in the region for the party, hence the “Operation 12 seats agenda.”

The gesture is primarily meant to resource the party’s structures at the constituency level to enable them touch base with the various Polling Stations and propagate the party’s success stories to the electorate.

A Deputy General Secretary of the NPP, Nana Obiri Boahen who was at the presentation ceremony described the gesture as unprecedented in the history of the party in the region for a sitting Regional Chairman to make such a donation.

He was optimistic that the motor-bikes will go a long way to facilitate the party’s campaign activities in every corner of the region and commended Abronye DC for his good leadership.

Documents Suggests Undervaluing Of Airport Company Assets To...
13 minutes ago