With Nana And Lulu Of Jianku He, China Prepares For Biological Wars
By Wolff Geisler, Dr. 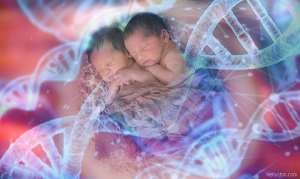 What was accomplished according to Jiankui He, from the "CCR5" gene by removing (deleting) the co-receptor, the "CCR5 Deletion gene was produced. The complete "CCR5" gene is present in all mammals.

The form deleted by, however, is only existing outside laboratories in 40% of a cat species and up to 25.9% in human groups. Practically all wild mammals and 99% of all humans have the complete "CCR5".

All gene alleles "CCR5 Deletion of humans so far came from a single person. The "p32" of the "CCR5" removed byJiankui He is important for defense reactions against rectal diseases, life-threatening liver diseases.

The Deletion is therefore unfavorable but it protects against plague, smallpox, tuberculosis, syphilis, cholera and retroviral immune deficiencies such as HIV. Reference: (Geisler W. The Jubilee Murders. 2018:90-92, 100-101)

Carriers of this gene have remained and remain alive while around them hundreds of millions of people fall ill and die in these epidemics. The proportion of people with "CCR5 Deletion p32" in the population of Europe has since the 14th century multiplied by a factor of two thousand from 1:20,000 to 1:10.

Washington D.C., USA, has the highest HIV infestation rates in the USA.

Also for "whites" there, the annual HIV incidence is four times as high as the US average. However, their HIV mortality rate is ten times lower than that of the total population.

But at 0%, most African states, as well as Iraq, Jordan, Syria (<1%) Egypt-Sinai, Lebanon, Saudi Arabia, India and China (as the only permanent member of the UN Security Council) are vulnerable to possible epidemics.