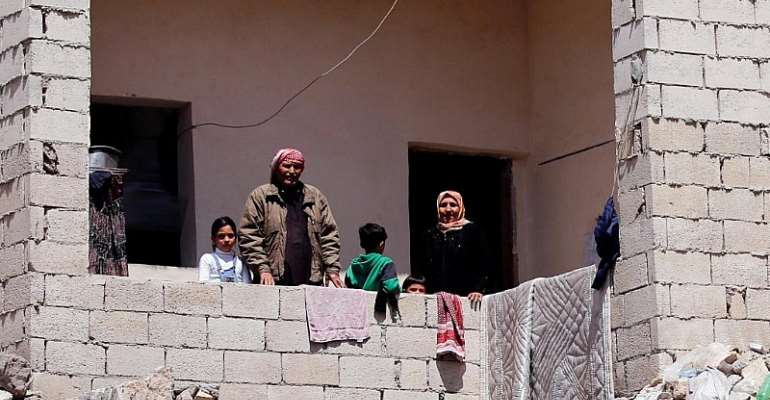 French President Emmanuel Macron said Tuesday he was "extremely concerned" about about the heightened violence in northwest Syria that has left several people dead and forced thousands to flee in the past week.

"The humanitarian situation in Syria is critical and no military option is acceptable," Macron said in a tweet on Tuesday.

"Attacks by the regime and its allies, including on hospitals, have killed dozens of civilians in the last few days," the president wrote.

Air strikes and shelling killed 13 civilians in northwestern Syria Tuesday, a monitor said, in the latest escalation to rattle a months-old truce and spark displacement.

"This is the third time we have been displaced but this time is the scariest," Abu Ahmad, a 40-year-old from southern Idlib told AFP.

"Overflights by warplanes and shelling have been relentless," he said while fleeing with his family towards areas near the border with Turkey.

At least 53 jihadist fighters have also been killed since Monday, in one of the deadliest flare-ups since a demilitarised zone around the Idlib region was agreed in September last year, the Britain-based Syrian Observatory for Human Rights said.

The September deal aimed to avoid an all-out government offensive inside the demilitarized zone around Idlib, but a surge in attacks since 20 April has made that perspective ever more imminent.

The renewed fighting came as regime forces advanced on two villages and a strategic hilltop in the region, the war monitor said.

The United Nations said it was alarmed by "reports of aerial attacks on population centres and civilian infrastructure".

At least seven health facilities have been hit since 28 April, it said.

Nine schools have also been struck since 30 April, and many more have closed their doors indefinitely.

Guterres called "for an urgent de-escalation of the situation as the holy month of Ramadan begins" and urged "the parties to recommit fully to the ceasefire arrangements of the memorandum signed on 17 September 2018".

The French president reiterated those concerns.

"We demand a halt to the violence and support the UN in backing a necessary political solution," Macron said.

More than 140,000 civilians have been forced to flee attacks since February, according to Refugees International.