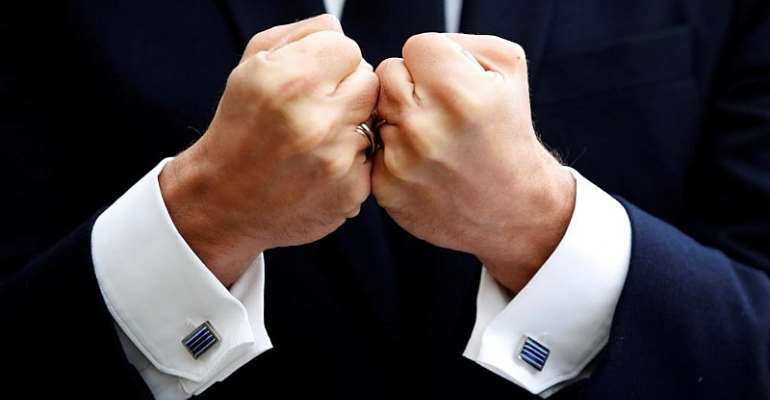 On this date two years ago, Emmanuel Macron became the eighth president of the French Fifth Republic. Several daily papers use the occasion to look back on his first two years in the top job.

Regional paper La Provence sums it all up very simply: Macron's first year was a cracker, crammed with a rapid series of reforms, controversial labour law changes had to be forced through by government decree.

People were either shocked or filled with admiration: here was a man who was determined to stick to his guns, no matter who got shot.

None of that passed without storms and landslides, but the president stood firm, smiling in the teeth of the gale.

The smile began to look a bit frozen as the second year opened, says La Provence, with the temperature dropping in the wake of two other reforms: lowering wealth tax and increasing the Generalised Social Charge, perceived as penalising pensioners.

In terms of political iconography, the president of the rich rapidly took over from the bright young executive who was afraid of nobody.

A presidential fixer by the name of Benalla went around punching protestors and by-standers while wearing a police uniform. Key people started to resign from the presidential team. Then somebody put on a high-visibility yellow jacket and all hell broke loose.

A turning point in a Yellow Vest

La Provence says the gilets jaunes protest movement resulted in the virtual suspension of all other government business. It forced budgetary realignments to pay the ten billion offered to the protestors.

The Great National Debate replaced national politics. The ongoing public demonstrations sparked a debate on policing and the use of force. Several intellectual heavyweights wheeled out their well-oiled clichés to ask if the French are inherently ungovernable.

What is sure is that a certain amount of grass has begun to spring through the cracks in Emmanuel Macron's reform calendar.

Unemployment assurance, retirement, the civil service and government institutions were all supposed to well on the way to bright new futures by now. Work has been suspended for the duration of the Yellow Vest crisis.

To say nothing of the impact of handouts totalling 17 billion euros on Macron's plan to balance the national books.

But the president hasn't been entirely wrong

Unemployment is down by nearly one point over the two years, economic growth is slow but stable (that the world's fault, not Emmanuel Macron's), the public debt has slimmed down considerably, despite recent handouts, classes for six-year-olds in difficult areas have been reduced in size, we've been promised we'll all soon pay less tax. “Soon” and “less” being the key indefinables, but we can always hope.

Right-wing Le Figaro says that the two years have fairly deflated voters' hopes. We thought that Macron was the next great thing, the man who was going to transform the country, Europe, the world, and make us all rich and happy.

But that was Disneyland. We've learned that he's bright, capable and human. There is no magic wand.

And Le Figaro points out that the two-year mark is always difficult to get past. Mitterrand, Chirac, Sarkozy and Hollande were all struggling in the ratings as they blew out that second candle. And none of them managed to climb back up the hill of public esteem.

Perhaps, suggests Le Figaro, the main lesson of Emmanuel Macron's recent press conference was a refusal of that fatality, an expression of determination by this young man to beat the two-year rule which turned his predecessors into residents of the Elysée Palace rather than presidents of France.

Reopening Of Schools: Not Testing Students, Staff Dangerous,...
44 minutes ago