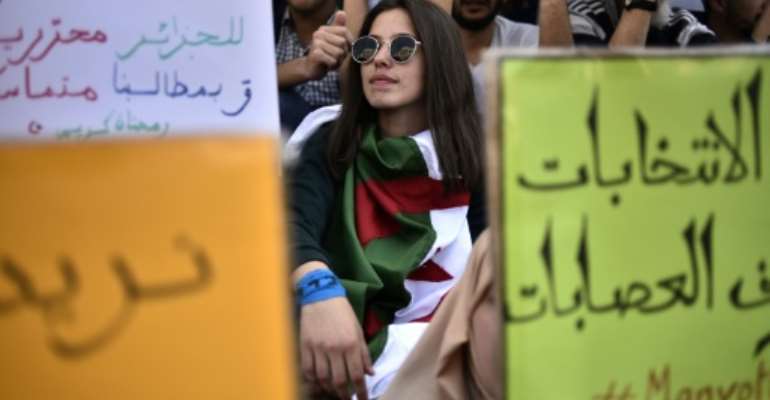 Thousands of Algerian students protested in the capital Algiers on Tuesday. By RYAD KRAMDI (AFP)

Thousands of Algerian students joined the first rally of Ramadan on Tuesday, pressing on with weeks of protests against the ruling elite after president Abdelaziz Bouteflika quit.

Wearing national flags over their shoulders, crowds gathered around the post office of central Algiers which has become the focal point of demonstrations.

"We will go on with the marches and the protests during and after Ramadan," said Kheredine, a second-year chemistry student.

"It's true that it's hot and that we fast, but we want to let the regime know that the mobilisation continues," he added.

The Muslim holy month of Ramadan is marked by fasting from sunrise to sunset, but demonstrators vowed they would not succumb to fatigue.

"If you think we're tired, you're wrong!" read a placard held by Sedik Ait, one of Kheredine's teachers.

Student rallies were also held in cities across the country, Algerian media reported, as protesters push for a sweeping overhaul of the political system.

They stand opposed to July 4 elections called by interim president Abdelkader Bensalah, who was appointed after Bouteflika stepped down last month.

The polls are strongly backed by Algeria's army chief General Ahmed Gaid Salah, once an ardent supporter of Bouteflika who ultimately called for the president's impeachment.

Tuesday's protest comes days after the arrest of the former president's brother, Said Bouteflika, a hugely influential figure who was frequently cited as a likely successor to his elder sibling.

Two former intelligence chiefs, General Mohamed Mediene, known as Toufik, and General Athmane Tartag were also detained and are facing charges including "conspiring" against the state.

Photos of the three were featured at the Algiers demonstration, alongside that of Gaid Salah who is largely thought to have ordered the arrests.