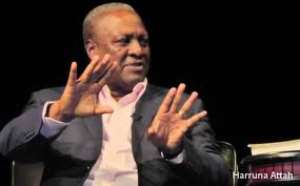 John Dramani Mahama seems to have contracted the “short memory syndrome” that he had, hitherto, diagnosed 30 million Ghanaians with. I wondered who was making those remarks about government’s necessary guarantee for the safety of journalists when I heard them, but John Mahama’s voice could certainly not be mistaken. He has that misleading charm like poison ivy, beautiful but deadly, charming but scornful, seemingly sensible but empty!

Let the whole world know that John Mahama did not only cause my arrest once in September 23, 2016, but, also, in December 2013 almost two months after my newspaper, The Daily Journal, debuted on the media scene, grabbing the nation’s attention with its hot and sizzling sensational stories. He unleashed on me immigration officers who had no training, whatsoever, in civility, decorum, and empathy. Of course, that made my day because I knew the kind of story that would feature on the front page when I was eventually released. My lawyer read the headline underneath my ear-to-ear grin, and did a lot of begging to have me rescind. So I let sleeping dogs lie!

However, on the 23rd of September 2016, when I was arrested off Egypt Air upon my return to Accra, little did I know that the Wednesday before, John Mahama was at the UN in New York touting Ghana’s sterling achievements in freedom of speech. His dogs on this mission of stifling free speech and intimidating journalists were: Baba Kamara (advisor on National Security); Marcus Pius Awelinga (BNI Director); Yaw Donkor (National Security Coordinator); and their rabid surrogates, including Mr Owusu stationed at the airport (he received me first) and the interrogator, Mr Ackon!

His media hopping puppies with sharp teeth like Felix Ofosu Kwakye, Fiifi Kwertey, Okudzeto Ablakwa were running around like headless chicken with stacks of my articles like an encyclopedia in the hands of unknowledgeable children trying to justify my arrest and incarceration. They failed to redeem their degraded and dirty image.

On a personal note, I have been the recipient of endless threats allegedly by orders from John Mahama. There are many journalists who have suffered similar vindictiveness from the NDC. Rented journalists of the NDC were the only ones under protection. Remember how the “montie 3” criminals were pampered by John Mahama and the NDC uncouth bandits for insulting and threatening to kill Supreme Court Judges!

Those who would not be silenced but could be bought were enticed to trade their conscience for pittance. It was alleged that John Mahama paid Steve Malory of the toilet paper “Africa Watch Magazine” five hundred thousand US Dollars to descend on President Akufo-Addo, then flagbearer of the NPP, with all sorts of lies and concocted medical conditions. John Mahama was soon exposed when he withheld another payment from Steve Malory, which forced the latter to write a true story about how the former was taken care of by Nana Akufo-Addo’s father and, subsequently, Nana himself, compelling John Mahama to run at speedy Gonzales pace to pay his dues. During the tenure of John Dramani Mahama as Vice-President and President, journalists were beaten. His personal assistant, Stan Dogbe, shamelessly punched a journalist in the face at an event in the UK. But what can you expect of those who allegedly kill a sitting President to take over power come what may?

So former one-term President, John Mahama, has no moral right to speak to the safety of journalists in Ghana because he was the nemesis of free speech, the hater of truth, and the epitome of wickedness.

Maybe this will help his memory: