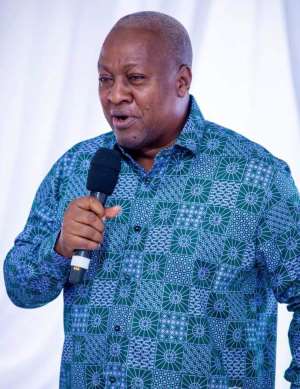 Former President John Mahama has promised to build the delayed Atuabo Freeport in Nzema in the Ellembelle District of the Western Region to provide more jobs for Ghanaians.

He told the people that this could only be possible when voted back to power in election 2020.

The former President who is now the Presidential Candidate of the opposition National Democratic Congress (NDC) said this where he paid a coutesy call on the Paramount Chief of Eastern Nzema Traditional Council, Awulea Amihere Kpanyinli at Atuabo during his two days "Thank You Tour" in the Region.

In July 2014, Parliament approved an agreement between the Government of Ghana and British company Lonrho Ports for the development of an oil and gas free port at Atuabo.

The US$700 million Atuabo Freeport project was expected to be operational in 2017 and serve as a regional hub in promoting safe and efficient offshore businesses but this did not materialized.

It was designed as part of the deep water port to grow the oil and gas industry.

It was also designed to house facilities like load out quay connected to fabrication assembly areas, and heavy lift capacity among others.

Clause seven of the agreement barred the Takoradi Port from further expanding its facilities for oil and gas until Lonrho builds its Freeport, recovers all its costs and make enough profit.

The clause compelled five NPP MPs in 2014 to file a suit at the High Court to challenge the legality of the establishment of the Atuabo Freeport but it was dismissed by the court.

These MPs after losing the case at the High Court, went to the Court of Appeal. This move delayed the project till the NDC government lost power to the NPP in 2016 but the Chiefs and people of Nzema are still pushing the NPP government led by President Akufo-Addo to continue the process and establish the project in the area.

But addressing the Chiefs and people of Atuabo in Ellembelle District, former President John Mahama promised to continue from where he left of to build the Freeport in the area if elected President in 2020.

He reveal that the NPP in opposition deliberately used some means to delay the project.

Mahama added that the project will create a lot of jobs for the teeming unemployed youth in the Nzemaland and therefore called on their support to enable him win the 2020 elections to fulfill his pledge.

He said "We planned to establish oil services port here but there was misunderstanding and our brothers on other side took the project to court to delay the project until we lost power but it is very important project and it is going to help oil industry and if NDC comes to power, we will follow the process and build the oil services port here in Ellembelle so that the the oil industry that has come and they will have a place where they can receive their services".

He continued "...and it is going to create employment for our teeming unemployed youth in Nzema".

He concluded that "When we were in power we did a lot in Nzema, we constructed the Gas Enclave Road and today when I was coming from Jomoro (Western Nzema) to this place (Atuabo), the road was in a good state and if NDC comes to power will continue these projects to make Nzema attractive".

On his part, the Chief of Nzema Akropong, Nana Adu Kwame commended former President John Dramani Mahama for his vision of establishing the Ghana Gas Company Limited at Atuabo in the Nzemaland adding that but for him the project would not have existed.

He said the chiefs and people of Nzema will forever be indebted to the John Mahama administration for putting up Ghana Gas infrastructure on their land.

“What I want to say is that in time past what your party did for us we appreciate but for you we would not have had Ghana Gas on our soil. You did it for us and today we are seeing a lot of things. You added ENI the other day I met some”, he acknowledged.

Former President John Mahama was accompanied by the former Petroleum Minister and the current Member of Parliament for Ellembelle, Emmanuel Armah Kofi-Buah, some former MMDCEs, the Western Regional Executives of the party led by the Regional Chairman, Nana Toku among others.