Rich Or Poor: We Will Leave Everything Behind 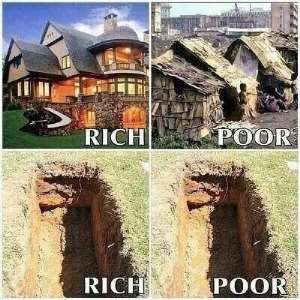 The message throughout the world in the past few days of Good Friday and Easter has been loud and clear: Christ is risen. He is risen indeed!

When our Lord and Savior Jesus Christ rose from the dead, he left certain valuable items behind in the tomb. Peter entered the tomb where Christ was laid and “saw the strips of linen lying there, as well as the burial cloth that had been around Jesus’ head. The cloth was folded up by itself, separate from the linen.” (John 20:6-7).

Jesus took nothing with him when he died. Upon his resurrection, he even left behind in the tomb valuable items that were used to cover him. Some may argue that Christ needed to leave the clothes behind as evidence of his resurrection. This is a reasonable argument. However, if Christ needed to prove to unbelievers in his day that he had indeed risen, there were better ways for him to have done so. For example, he could have revealed himself to Pontius Pilate who judged and sentenced him to death; to the religious leaders like Caiaphas and the Pharisees who wrongfully accused him; or to the Roman soldiers who whipped and nailed him to the cross. And for good measure, he could have tormented them by paying them several unwelcome visits while they were awake or asleep as punishment for crucifying an innocent person, the only begotten Son of God, who had and still has power over life and death.

Fortunately, Jesus does not deal with us that way, and he actually forgave all those bad actors while he was dying on the cross. In fact, Jesus revealed himself to only his disciples and those whom God had already chosen (Acts 10:40-41). I think that Christ left the clothes behind because, although they were useful on earth, they were not needed for his resurrection or eternal life in heaven. The man-made clothes were an unnecessary baggage that would have put extra weight on him as he ascended into heaven.

Note that when Jesus rose, he did not immediately go to the Father in heaven. We know that because apparently when Mary tried to touch him near the tomb on that resurrection day, he said to her, “do not hold on to me, for I have not yet returned to my Father.” (John 20:17). Jesus must have been clothed in God’s own glory, and not by anything that human hands had made. It means that the beautiful linen cloth the rich man and disciple of Jesus called Joseph of Arimathea used to adorn the body of Jesus (see Matthew 27:57-59), was unsuitable for the resurrection or unworthy in the sight of God in heaven. We will leave everything behind.

The Prophet Elijah, too, left everything behind. He dropped his cloak or cloth (mantle) as he was ascending into heaven (2 Kings 11-14). That may have symbolized the passing of prophetic authority from Elijah to Elisha, but there could be more. After all, when Moses passed the leadership to Joshua, it does not appear that he gave him his cloth. Other plausible explanation could be that Elijah dropped his mantle because, as valuable and helpful as it was to him on earth, it was not needed in heaven. It was an extra baggage that could needlessly weigh him down as he cruised to heaven.

Jesus and Elijah – two people who ascended into heaven – left behind even the most intimate valuables like articles of clothing. If we are going to leave everything behind, why are some of us using evil means, such as cheating, bribery, corruption, theft, murder, embezzlement, fraud, extortion, and other forms of unethical or illegal means to acquire money and other wealth? Why are we hoarding money and other wealth instead of sharing what we have with those in need?

Some live in affluence, extravagance, and opulence while millions in this world wallow in abject poverty without the basic necessities of life like food, water, clothing, shelter, or medicine. We need to re-assess and re-organize our priorities, keeping in mind that those to whom we leave our precious wealth may spend it irresponsibly and recklessly. If you expect your heirs or inheritors to do good with the wealth you leave behind, do most of it yourself.

What is at stake is the very soul of each person in relation to acquisition and use of wealth. The lure of money or, as the Bible calls, “the love of money,” is enticing. That was why Jesus posed these two questions to his followers: “For what will it profit a man if he gains the whole world and forfeits his soul? Or what shall a man give in return for his soul?” (Matthew 16:26). Writing to a young pastor called Timothy who was in charge of the Church at Ephesus, the Apostle Paul reminded him that “we brought nothing into the world, and we can take nothing out of it,” and made it clear that “the love of money is a root of all kinds of evil. Some people, eager for money, have wandered from the faith and pierced themselves with many griefs.” (1 Timothy 6:7, 10). The advice is still good for pastors and all of us today.

Paul was not encouraging laziness or idleness. On the contrary, he himself worked as a tent maker and wanted people to work, stressing that “if a man will not work, he shall not eat.” (2 Thessalonians 3:10). Further, the Bible tells us that “a good man leaves an inheritance for his children’s children, but a sinner’s wealth is stored up for the righteous.” (Proverbs 13:22). It is how and why we accumulate wealth that matter. We should keep things in the right perspective, and build more of our treasures in heaven.

PrayerHouse Ministry is dedicated to providing a quiet facility for Christians to pray individually by themselves without any intermediary priest, pastor or any other person. This is a free service. No money is demanded or accepted. One facility is located at Kyerekrom / Fumesua, near Building and Road Research Institute Offices, one mile off the Kumasi-Accra Road and next to a house called Grace Castle. If you are interested, please contact Agnes at 027-7423815. Another is located at Kantinkyiren, at the junction of Kantinkyiren and Konkori, off the Kumasi-Obuasi Road, branching left at Trede junction. Contact Kwadwo at 020-8768461 / 0246-989413.