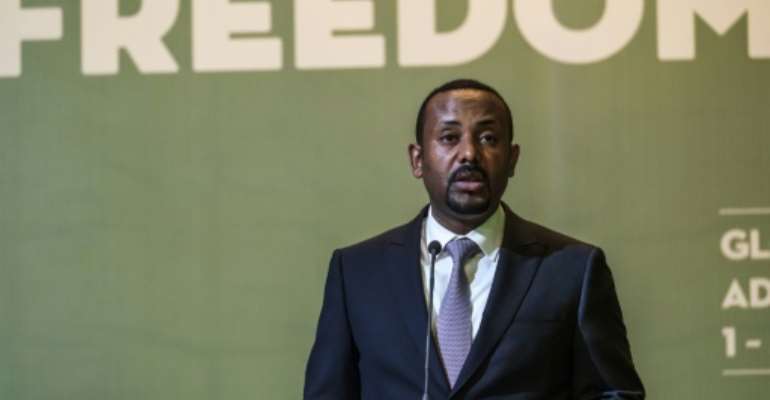 Ethnic clashes have flared in Ethiopia since Abiy Ahmed became prime minister. Some analysts see a link with slackening control over regional authorities by the ruling party. By EDUARDO SOTERAS (AFP)

Dozens of civilians have been shot dead in ethnic clashes in Ethiopia's northern Amhara state, a regional official said Friday, describing the attacks as retaliation for earlier violence.

"Search-and-rescue missions are still ongoing to find victims and survivors from Monday's attack, but I can confirm the death toll runs into several dozen," Geleta Hailu, the director of communications in neighbouring Benishangul Gumuz state, told AFP.

He did not provide an exact death toll but said more than 80 people were injured in the assault on the Gumuz ethnicity in the state.

Ninety had taken shelter in a local school.

The gunmen have not been identified but Geleta said the attacks appeared to be retribution for the killing of at least 21 people in separate clashes last weekend between the Gumuz and Amhara ethnic groups in Benishangul Gumuz state.

Homes were also torched in that outbreak of violence, which local officials said began as a dispute between two labourers.

Communal clashes, typically sparked by disputes over land, are common in Ethiopia.

A fast-growing population of 105 million has added to pressures on farming in a country of sharp ethnic divisions.

The violence has surged since Prime Minister Abiy Ahmed came into office in April 2018.

Abiy has been praised for his efforts to end the repressive, exclusionary governance that had plunged the country into turmoil.

Mass anti-government protests unfolded over two years before he was sworn in.

But analysts also link the rising violence with a slackening of the tight control the ruling Ethiopian People's Revolutionary Democratic Front (EPRDF) once held over regional security forces and administration.

Shortly after Abiy took office, a long-running dispute over land in southern Ethiopia's West Guji and Gedeo zones erupted into ethnic fighting that forced nearly 1.8 million people to flee their homes in 2018, the highest displacement rate on the planet.

Last September at least 58 people, mostly from minority ethnic groups, were killed on the outskirts of the capital Addis Ababa.

Africa's second-most populous country is partitioned into nine regions with borders that follow ethnic lines -- a bid to empower different groups in the diverse nation after the fall of the Derg military junta in 1991.

However many groups continue to feel marginalised by the central government, and ethnic rivalries have deepened.