Abiy Ahmed Ali, Prime Minister of the Federal Democratic Republic of Ethiopia laureate of the 2019 edition of the Félix Houphouët-Boigny - UNESCO Peace Prize 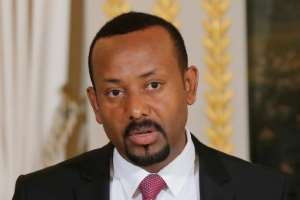 The jury also recognizes the laureate's worthiness for the reforms undertaken to consolidate democracy and social cohesion. Finally, the jury considers this distinction as an encouragement to pursue his commitment to the promotion of a culture of peace in the region and across the African continent.

The Jury met on 29 April at UNESCO Headquarters in Paris to designate the laureate of the 2019 edition of the prize, which will mark the 30th anniversary of its inception.

In 1989, in order to pay tribute to President Félix Houphouet-Boigny’s action for peace in the world, 120 countries sponsored a resolution unanimously adopted by UNESCO's Member States to establish the Félix Houphouët-Boigny Prize - UNESCO Peace Prize . The Prize is intended to honor living individuals and active public or private institutions or bodies that have made a significant contribution to promoting, seeking, safeguarding or maintaining peace in conformity with the Charter of the United Nations and the Constitution of UNESCO.

Audrey Azoulay, Director-General of UNESCO, on an official visit to Ethiopia on 2 and 3 May on the occasion of World Press Freedom Day, will meet with the Prime Minister and convey her warm congratulations.