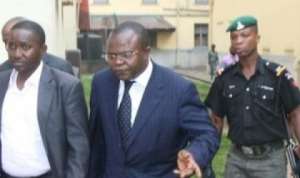 Precisely, on the 26th of November, 2018, disbarred Lagos lawyer, Emeka Ephraim Ugwuonye was remanded in prison custody, after being arrested from a Magistrate Court in Abuja, where he was charged for injurious falsehood. Over five months after, he has remained in custody. What could have happened? Why is the ‘Harvard-trained’ lawyer of about thirty (30) years held in near perpetuity?

Federal High Court 33, Gudu, Abuja, presided over by Hon. Justice Modupe Osho-Adebiyi refused to grant an application for bail filed by Ugwuonye, ordering that he remains in Prison custody. He is therefore to remain in Kuje prisons till the charges against him are determined by the Court, as he is yet to appeal the court’s ruling on his bail application.

Prior to his present ordeal, Ugwuonye was a regular visitor and detainee at the Force Headquarters, Abuja and even the Federal Capital Territory command of the Police. Describing him as a customer to the Police would not be out of place. But, what really happened? What is his offence and why would a lawyer be treated like a common criminal?

Emeka Ugwuonye was charged before a High Court in Abuja, alongside four others over their alleged involvement in the dastard killing of an Abuja business woman, Charity Aiyedogbon.

“That you, Ezeugwu Paul Chukwujekwu, Adogah Emmanuel and Ephraim Emeka Ugwuonye all ‘M’ on or about 9/05/2016 in Kagini, Abuja within the jurisdiction of this Honourable Court did commit illegal act to wit: Armed Robbery when you armed yourselves with cutlasses and other offensive weapons, attacked and robbed Mrs. Charity Chidiebere Aiyedogbon ‘F’ (now late) of her Acura ZDX Jeep with registration number RSH 225 AH Abuja gray colour, one Samsung Galaxy phone, one Itel 1408 phone, one Iphone and Ipad and other valuables….”

The Charge Sheet reads in part:
“Extortion by threat of accusation of an offense punishable by death, Injurious falsehood against the Nigerian Police, Injurious falsehood against David Aiyedogbon, Giving false information with the intent to mislead public servants, Obstruction Public Servant in the discharge of his functions, insultive or abusive language against the Nigerian Police Force, Influencing cause of Justice and Inciting Public disturbance.”

It all started in 2016, following the mysterious disappearance of an Abuja-based business woman, Charity Aiyedogbon.

Ugwuonye had claimed in the exhibits tendered before the courts, to have overwhelming evidence that the missing woman, Charity Aiyedogbon was dead, and that she was killed by her estranged husband, David Aiyedogbon. He is yet to tender any evidence in support of his claims.

In all of these, Ugwuonye has not tendered any evidence whatsoever, both to the Police and the Court. One now asks- where is the overwhelming evidence Ugwuonye claimed to have regarding those that killed Chacha? He either provides it or dances with the spirits.

In my previous articles on this subject, I raised critical questions yearning for answers. First, he (Ugwuonye) claimed to have been in the United States as at the time of Chacha’s disappearance and only came into Nigeria in June, 2016, after being ‘briefed’ to handle the matter, but his call log betrayed him, showing that he was in Abuja on the 10th, 11th and 12th of May, 2016- same time Chacha is said to have gone missing.

Again, his relationship with the principal accused- Chukwujekwu Ezeugo, popularly known Jekwu remains suspicious. He is suspected to have aided his initial escape, as, according to Police sources, the day he (Jekwu) was to be arrested, Ugwuonye personally called the Police, promising to produce him, only to revert 24hours later, telling the Police that he had escaped. Police investigations may have established the link.

More so, Ugwuonye had displayed a dismembered body earlier, saying, with absolute confidence that it was that of the late Chacha (prior to Police investigations). Has Police investigation unraveled this? Certainly, they did not charge him to court for nothing.

Meanwhile, till date, Emeka Ugwuonye has not substantiated any of his claims; not even a bit of his “overwhelming evidence” has been tendered. This is certainly, how not to be a Lawyer!

'Akufo-Addo's people not talking to me anymore because of my...
15 minutes ago