A Sacrificial Lamb And Two Saints 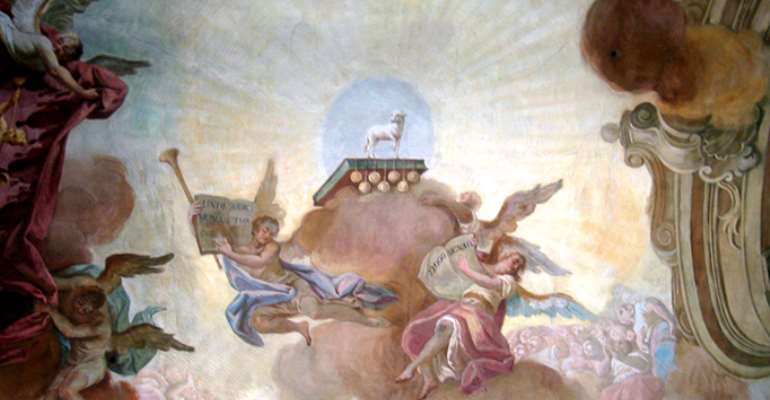 In order for my readers and I to be on the same wavelength, the nouns; Lamb and Saints used in this epistle are in total variance with their biblical connotation. I personally have reservations about the Bible and won't want to spark another religious debate after the Chief Imam's fiasco. That is for self personified Angels like Obinim and Rev. Obofour to talk about.

I roughly had to intervene in a political banter this morning. Certainly, these are political neophytes whose only duty is to spread a well coerced write ups from their paymasters. Nonetheless, I have a duty to correct the wrongs.

To suggest that the journalist, Mr Edward Adeiti erred in "leaking" the recorded audio to the public is the weakest commentary, very unfortunate and disturbingly troubling argument to make any day, and this possibly could only come from a semi-literate who dwells on propaganda and poor reasoning.

Now, the issue on the radar has to do with a conscientized journalist, who differs permeating poverty that has seen decades of succession in his family. His conviction was and is rightly so; to expose the powerful in our society dabbling in illegalities.

This singular act of this poor journalist has the potential of saving the lives of innocent souls. To fight injustice is to give an opportunity for someone to live again. It brings inherent joy and satisfaction to the oppressed. To the oppressor, they careless about you!

On the tape, an old man with a trembling voice is heard saying, "I am on my knees, begging you". Hahahahha... God of Israel! Anyway, let me ask my Christian friends. Is the God of Israel different from the Arabian God (Allah)? I know that in Israel, polygamy is acceptable. And Abraham the good friend of God was a polygamous man. Or? Yet we are asked to marry one. Where from this missing link?... This discussion certainly should be for another day, not today please.

Now back to the old man on his knees. "Nso, hu gaa' fara... (To wit; Dad, I ask for your forgiveness). Coming from a culturally rich society, we are taught to be measured in talking about the elderly. So, I shall be brief about his unacceptable conduct on the phone. Even the Vice President Dr. Bawumia who differ all odds and went on peddling untruths about elderly statemen and sometimes tantrums. I was restrained in writing about him.

Did I hear "kill the story" in the audio? Unfortunately, the story survived this murder attempt. Yes! From his demeanor on the phone, killing stories is a simple task for him. Well! Let me ask him.

Hello.... Sir! How many stories have you killed during your tenure as Upper East Regional Minister? I got a whisper that Bolga - Bawku road story was also killed. This government's inability to complete the road has permanently separated me from my family. My bones ache a lot, especially when I travel on "manholes" like Bolga - Bawku road.

Hon. Rockson Bukari, your attempt to kill yet another story failed monumentally. My problem is, what were you trying to teach this young man? Sir, will you be glad to see a society where the powerful would use his/her wealth and power to lord themselves over the weak? At your age, I know you've experienced a lot, and you would not wish to leave behind a society with broken moral conscience.

Then we hear of the government communication machinery, trumpeting fight against the dreaded galamsey. Jesus Christ! What fight? My sources say, the old man was forced to resign. An exercise which many think is senseless and meaningless.

You have an appointee who was caught on video taking sums of goodies just to aid galamsey. The height of this impunity is when the supposed Senior Minister sought to rationalize the deportation of Aisha Haung. If these saints are walking around, why sacrifice Hon. Rockson Bukari? Is it because JB Dankwa is not his uncle?

Mr President sack your saints. Enough of the face saving antics. We have been around for a long time. These mannerisms would not gel. Until that day when you would have mastered courage to let go of the saints, it's a failed war.

To Edward Adeiti, never give up. We know the fight is a mighty one but keep your anchor on God. Just a little advise; this government is a mafia one ooooooo. Watch your back. Huh! Can't you see heavyweights like Manasseh Azuri Awuni, Tiger Eye becoming dumb and scared respectively?

Just for public announcement, anyone near Manasseh Azure Awuni should tell him, we have missed his write ups. At least if the documentaries this time is causing him to change his sleeping place for weeks, then he should just revert to his love letter series; letter to my future wife.

If he still wants to do investigative journalism, then he has to wait, when H E John Mahama return in 2020, we will sanitize the media space. You can do a story about a gift to the President and no one will kill you nor your story. Until then, I wish you Happy May Day in your quiet corner.

Hon. Rockson Bukari you are welcome home. I've always maintained that Accra is not where we belong. Hope you will use this solemn moment to do a retrospective assessment and better appreciate where you belong.