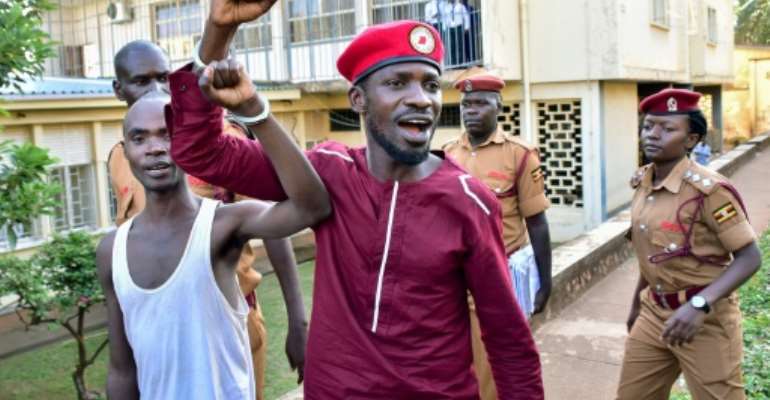 Ugandan police fired teargas and rubber bullets at scores of demonstrators who took to the streets Tuesday to protest the arrest of anti-government pop star turned MP Bobi Wine.

Crowds of people held rallies in several suburbs of Kampala a day after the latest arrest of the politician, according to an AFP reporter.

"There are clashes between the police and youths who threw stones at the advancing police, a number of people have been injured and we took some to Mulago" hospital," Kampala Red Cross Manager, Praise Turyebwa told AFP.

In a statement, the Uganda police said there was a minor incident "where undisciplined youths tried to demonstrate" but that the situation had been brought under control.

Local television stations showed images of fires being lit in the middle of major roads, causing traffic jams around the Ugandan capital.

Bobi Wine, whose real name is Robert Kyagulanyi, was arrested Monday, barely two days after briefly being placed under house arrest after being detained on his way to a concert at his nightclub.

One of his lawyers told AFP he had been remanded to prison until May 2, over an allegedly illegal protest in 2018.

Amnesty International on Tuesday called for his immediate release.

"The Ugandan authorities must immediately free Bobi Wine and stop misusing the law in a shameless attempt to silence him for criticizing the government," said Amnesty's regional director Seif Magango.

"It is not a crime for Bobi Wine to hold a concert or organize a protest; it is a right enshrined in Ugandan and international law."

The singer, who entered parliament in 2017 and has emerged as a leading critic of President Yoweri Museveni, has struck a chord with young Ugandans with his songs about social justice.

Authorities have repeatedly blocked him from performing publicly.

One of Wine's songs contains the lyric "freedom fighters become dictators," while others hint that Museveni has stayed in power too long.

The 74-year-old leader has ruled Uganda since seizing power at the head of a rebel army in 1986. He intends to stand for re-election to a sixth term in office in 2021.