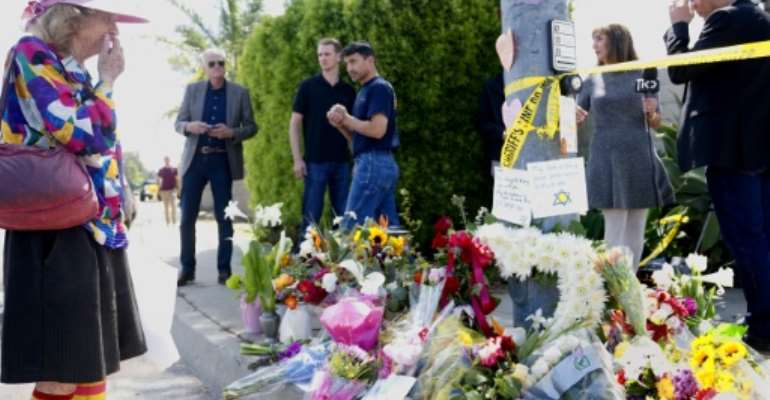 Mourners and well wishers leave flowers at a makeshift memorial across the street from the Chabad of Poway Synagogue on Sunday, April 28, 2019 in Poway, California, one day after a teenage gunman opened fire, killing one person and injuring three. By SANDY HUFFAKER (AFP)

After a synagogue shooting in the United States and a church attack in Burkina Faso, UN Secretary-General Antonio Guterres warned Monday that the world is nearing a "pivotal moment" in the battle against hatred.

"As crime feeds on crime, and as vile views move from the fringes to the mainstream, I am profoundly concerned that we are nearing a pivotal moment in battling hatred and extremism," Guterres said in a statement.

A teenage gunman opened fire at a synagogue in California on Saturday, killing one person and injuring three others including the rabbi as worshippers marked the final day of Passover.

On Sunday, gunmen killed four worshippers and a pastor in a small town in Burkina Faso, the first attack on a church since jihadist violence erupted in the African country in 2015.

On March 15, 160 people were killed in attacks on mosques in New Zealand.

Guterres deplored a "disturbing groundswell of intolerance and hate-based violence targeting worshippers of many faiths," saying such violence had become "all-too-familiar."

"Houses of worship, instead of the safe havens they should be, have become targets," he said.

The UN chief appealed to religious leaders, governments, civil society and all others to combat hate, saying "this is a job for everyone."